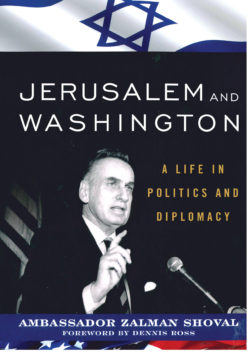 They called it “coffee diplomacy.”

After the formal opening of the Madrid peace conference in 1991, Israel and the Arab countries agreed to get down to real peace talks in three negotiating teams: Israeli-Lebanese, Israeli-Syrian and Israeli-Jordanian and Palestinian. Zalman Shoval — whose memoir “Jerusalem and Washington: A Life in Politics and Diplomacy” was recently published — was one of the Israeli negotiators with the Palestinian-Jordanian delegation.

But the peace talks got off to a very slow start. At first, Eli Rubinstein and Abdel Salam al-Majali, the heads of the delegations, sat on couches in a room in the State Department while their delegations (including Shoval) were in separate rooms.

Every so often, the two delegations would leave their rooms and have coffee in the lobby, but they said nothing to each other.

“The ice was broken,” Shoval writes of his coffee diplomacy breakthrough. “Over the next minutes both delegations had a lively discussion on the quality of American coffee compared with Middle Eastern. A short time afterward, our American hosts managed to shepherd the delegations into the same room, and the road, at least to the peace treaty with Jordan, was opened.”

This diplomatic tidbit was one of the highlights of this book by Shoval, a veteran Israeli politician — he was an adviser and confidante to David Ben-Gurion, Moshe Dayan, Menachem Begin and Benjamin Netanyahu, among other political leaders. And, he was the Israeli ambassador to the United States twice in the 1990s, once during the presidency of George H.W. Bush and again during the term of Bill Clinton.

Readers occasionally get a glimpse of the relations between Israel’s man in Washington and the officials who man the State Department.

During the first Gulf War, the United States and Russia issued a joint statement in which the two powers said after the war, they would turn their attention to solving the Arab-Israeli conflict. Israel is always concerned about the big powers imposing a settlement on the conflict — and also worried about Russia’s traditional anti-Israel stance — so Shoval asked for and got a meeting with Dennis Ross at the State Department.

After the meeting had begun, Ross got a telephone call and told Shoval that Secretary of State James Baker wanted to see them both in his office. Shoval writes: “It was clear to me that this was prearranged — things like this don’t happen by chance.”

The same scenario played out some 11 years later during Shoval’s second stint as ambassador.

Shoval spent a good deal of time working on “public diplomacy” (hasbarah), the attempt to explain Israeli actions to foreign governments and people. In that role, he was experienced in dealing with journalists. Thus, his evaluation of various American reporters and analysts carries some weight. Charles Krauthammer, he writes, was “a warm Jew”; Thomas Friedman’s views on the Middle East are “balanced, and sometimes ‘balanced’ toward the Arab side”; George Will is “a friend and a supporter”; Pat Buchanan is “anti-Semitic”; Richard Cohen had “left-leaning views” but “grew increasingly sympathetic toward Israel”; and Wolf Blitzer is “a superstar.”

The author concedes he made some mistakes along the way. In 2000, Shoval was a member of the group that accompanied Ariel Sharon to the Temple Mount, which precipitated a riot and, supposedly, led to the Second Intifada. Shoval says he regrets having taken part in the event.

His memoir makes a solid contribution to our understanding of Israeli political life and the relationship, sometimes stormy, between the Jewish state and its main ally, the United States.

Aaron Leibel’s novel, “Generations: The Story of a Jewish Family,” is available at amazon.com and in Kindle format.