Lauren Chmara has a snappy response to the lack of inclusion she sees for people with disabilities.

Snapping fingers, she explains, is a way of getting attention or a substitute for applause. So when the 16-year-old Falls Church resident was looking for a hook for a social media project for Jewish Disability Awareness and Inclusion Month, being marked in February, she picked the snap, albeit of the photographic variety.

“I love using my phone. I love using social media and I want to use social media to bring people together, especially young participation,” Lauren says in a phone interview while riding home from Bullis School in Potomac, where she’s a junior.

Lauren’s hashtagged project, #SnapForInclusion, launched on Monday. “My overall goal is to spread understanding of how to make everything inclusive,” she says.

Anyone can spread the word — and image, she says. Just snap a picture of an activity or environment that shows inclusion. Then add a creative caption. Finally load it onto Facebook, Twitter or Instagram using the hashtags #SnapForInclusion and #FederationGW.

Lauren says she’s been working for worthy causes since she was in third grade. For her bat mitzvah project, she volunteered at the Jewish Foundation for Group Homes. Several residents joined her on the bima during the ceremony to read a prayer with her. 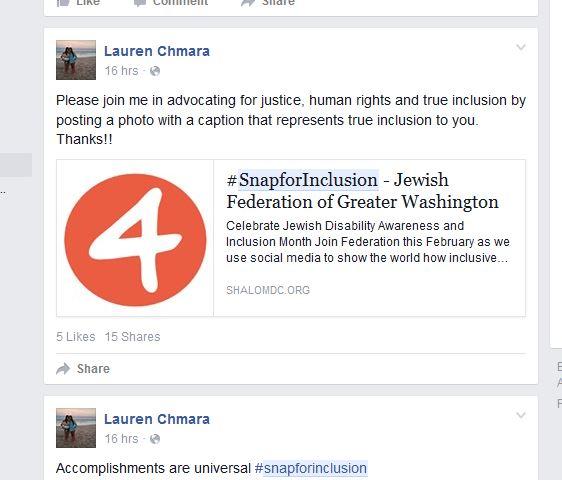 She participates in the Charles E. Smith H2YP youth program, learning about philanthropy and project funding. She’s also a member of The Jewish Federation of Greater Washington’s disability inclusion committee, which helped her develop and launch the snap project.

Lauren says she draws inspiration from her grandmother, Honey W. Nashman, a professor emerita of sociology at George Washington University. “I’m very close to my grandmother and she likes to work with people with disabilities. And I’ve loved it ever since.”