The first piece of legislation Evan Glass proposed when he became a Montgomery County Councilmember in 2019 was the Pay Equity Act. “It makes sure that everybody gets an equal amount of pay for the work they do,” he told members of Temple Emanuel during its annual Pride service on June 11.

Glass, the council’s first openly gay Jewish member, spoke of the importance of social justice and LGBTQ rights, and echoed their importance to the Reform congregation in Kensington.

“Every Jew is responsible for their fellow human,” he said, paraphrasing Leviticus.

For Rabbi Adam Rosenwasser and his congregants, Pride Shabbat values — diversity and inclusion —are ones Temple Emanuel strives to uphold every day of the year.

But there is more work to be done, Rosenwasser said in a telephone interview.

“We are committed to taking the next step in inclusion, which I believe includes making our synagogue an anti-racist community,” said the rabbi, who led the Zoom service from his home with a Pride flag hanging in the background.

Synagogue leaders formed a diversity, equity and inclusion committee this year to combat racism by looking at the functions of the temple and figuring out how the community can better support people of color.

“It’s second nature to our being a caring community in general,” she said in a telephone interview. “We’ve made a commitment to social justice work. And the Jewish value of repairing the world through justice, compassion and wholeness is something that we practice.”

Compassion led the synagogue to update restroom signage and install a single-use bathroom to be more inclusive, Raynes-Miller said.

At the service, new member Candace Groudine read a pride-themed version of Al Hanissim – a prayer about miracles and liberation:

“You have given us the strength to witness and create wonders, to be who we are and to love whom we love not only in the safety of our homes but outside in the light of the world,” read Groudine. “May we never know shame again.”

Groudine said she identifies as a Jewish lesbian.

“When I said us, I really meant us,” she said in an interview. “In fact, it was difficult for me to read it without tearing up.”

Lisa Reff helped organize the Pride service. She said the temple was supportive when her child, Kayden, came out as non-binary. And it was accommodating when Kayden used the Hebrew plural (gender-neutral) form of the word “teacher,” while they were a teaching assistant at the synagogue, said Reff.

“That was an example of the temple accommodating and keeping in mind and being aware when possible,” said Reff. “That idea of inclusiveness has been around for years.”

The inclusiveness is what drew Groudine to join. “I think social justice and activism is at the core of Judaism,” she said.

“I think as a community, we should absolutely be open and inclusive to everybody,” said Reff.

Rosenwasser said inclusion is “critical” as a Jewish value and that “equality for all” and “inclusion of all” are parts of the temple’s mission.

“We’re welcoming to LGBTQ folks, to people of color, to interfaith families,” he said. “Everyone is always welcome.”

Temple Sinai is building a place to fit all those people 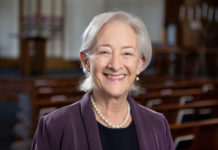