What’s a nice Episcopalian guy from Kansas City doing in the world of Yiddish theater?

Shane Baker says he’s having the time of his life.

Baker, who dabbled in magic, rode the elephant at the circus’s annual stop in town and has fond recollections of covered dish events in church basements as a child, is now a Yiddishist, fluent in the language and culture of generations of Eastern European Jews.

He’s a member of the New Yiddish Rep, one of two professional Yiddish theater companies in New York.
On Sunday, Baker comes to the Bender Jewish Community Center of Greater Washington in Rockville with “Tevye & Friends,” based not on the beloved 1964 Sheldon Harnick and Jerry Bock musical “Fiddler on the Roof,” but on the original Sholem Aleichem stories, which were a paean to a disappearing culture even when he penned them in 19th-century Ukraine.

“’Fiddler’ is a great show,” Baker said last week from New York where he is executive director of the Congress for Jewish Culture. “We say that the best virtue of ‘Fiddler’ is that it’s universally known and loved.” So the Tevye character, so memorable from the musical, is the link that Baker says gets people in the door to hear something in Yiddish.

Tevye is the entrée into this vibrant Jewish world, says Baker, but he wants audiences to discover more of Sholem Aleichem — who has been called “the Jewish Mark Twain” — and the fun and poignant stories he wrote. “There’s Menachem Mendl, a quintessential shlimazel …. and Sholem Aleichem’s very first piece of writing, ‘A Stepmother’s Curses,’ we translate it ‘A Stepmother’s Trash Talk.’ She was an impatient and unpleasant woman who apparently had a gift for invective that inspired him to write it all down. He put together a dictionary or lexicon at about age 7 or 8.” 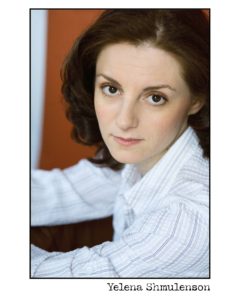 Baker’s earliest memories of hearing Yiddish were at the movies, where the Marx Brothers’ “Animal Crackers” was playing. “Groucho sings ‘Hurray for Capt. Spalding, the African explorer/Did someone call me schnorrer?’ Everybody laughed and 5-year-old Shane doesn’t know why people are laughing so I turned and asked, ‘Daddy, what’s a schnorrer?’ Being a good gentile from the Midwest, he gave the only answer he could: ‘It’s made up. It doesn’t mean anything.’”

As it turned out for Baker, as his interest in theater grew, he began to discover “that there’s a whole collection, a whole language of these words and it wasn’t made up. I realized that Yiddish is a very rich language. I started to see that, even in serious theater on the straight stage, Yiddish played a role. There was Stella Adler, a great teacher of Stanislavsky’s acting method, who was a bigger success on the Yiddish stage than on the English-speaking stage as an actress.”

An autodidact, he began teaching himself the language with college-level textbooks and after college moved to New York and continued his studies at YIVO’s advanced language program. He also began spending time with some older Yiddish actresses, often visiting them at home where they fed him herring, chicken soup, tzimmes and told stories in the mamaloshen — the mother tongue, as Yiddish is called. “That,” he said, “was my real education.”

Eventually, Baker, 48, earned a masters degree in Yiddish at the University of Texas-Austin. “But I wasn’t interested in academia. My interest is in the living, breathing culture,” he said. “And, for a culture that is supposedly passed its heyday, there’s a lot going on. We’ve now got two active Yiddish theaters in New York. The other is the Folksbiene.”

He adds, “I was really lucky to get involved in Yiddish theater when I did. I don’t think I could have had anything like the experience, the training, the connection to the secular Yiddish history, had I not come along in the late ‘90s, because virtually everyone from that European-born generation is gone, whether they came over before the war or after. It provided an invaluable link to the theatrical tradition for me.”

And Baker continues to thrive as an Episcopalian in the world of Yiddish. He notices a rising interest in Yiddish theater and culture: For New Yiddish Theater, he translated and starred in a Yiddish version of Samuel Beckett’s “Waiting for Godot,” and he also performs his one-man show in English and Yiddish, “The Big Bupkis: A Complete Gentile’s Guide to Yiddish Vaudeville” to large audiences. Last year the New Yiddish Theater received two Drama Desk award nominations, competing in the big league against professional theaters of all genres.

Talk to Baker for even a few minutes and he’ll convince you that there’s nothing old-fashioned or musty about Yiddish theater and culture. Baker recalled an observation from the great Yiddish writer Isaac Bashevis Singer: “For a 100 years people have said this culture is dying. Singer says in the Jewish tradition there’s a big difference between dead and dying.

“So, Yiddish culture has been dying for well over 100 years,” Baker adds. “With any luck at all it will be dying for a few hundred more. It should die gezunterheit — in good health.”