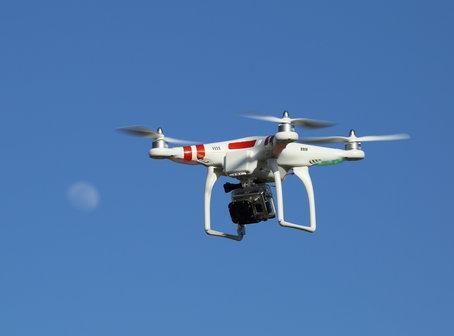 Like small buzzing, flying pests, drones seem to be everywhere these days: a technology waiting for mass acceptance by filling newspaper columns, YouTube videos and the nightmares of those Americans who see them as a privacy and safety disaster waiting to happen.

They’ve been touted as the answer for jobs that are too dirty and dangerous for people to do. They’ll deliver our online orders to us.

But what if one cuts up your face, as a drone carrying mistletoe inside a TGIFridays did earlier this month, slicing a photographer’s nose and lip? Or if a police department drone photographs through your window inside your house? Or if you look up from your backyard barbecue and see a drone hovering overhead?

Welcome to the brave new world of unmanned aerial vehicles, or UAVs, as drones are also called. Government regulators are playing catch-up on writing rules, as businesses are lining up to be licensed to fly drones commercially. Meanwhile, sales of drones for hobbyists are taking off this holiday season. Amazon is selling more than 10,000 drones a month, Bloomberg reported.

For now, the skies largely belong to the hobbyists, who are allowed to fly without a license. The pilot must always be in eye contact with the drone, which must not climb higher than 400 feet – about 40 stories. To avoid accidents, drones cannot be flown within a five-mile radius of airports.

But the FAA has limited policing power. And the agency recently reported that since June, there have been 175 reported incidents of drones flying into restricted airspace. Of these, 25 almost collided with an airplane or helicopter.

New FAA rules are not expected for a couple of years. This puts the United States behind countries such as Canada and Japan, which have rules in place for the use of drones in national airspace.

What if, in the absence of laws and regulations, a drone hits and injures someone. Who is responsible and who can sue?

Roger Schechter, professor of law at George Washington University, said the legal system has experience dealing with new technologies. What liability law does is create an analogy with an older technology to cover the new one.

A bigger question, one for the courts to decide, is whether the rules of negligence or strict liability should be applied to damages caused by drones.

“In American accident law, you have to prove the other party committed a careless act,” or was negligent, in other words. With drones, which are controlled remotely by a pilot or preprogrammed to fly, “you can imagine an operator who’s done something wrong.”

Strict liability covers things that are inherently hazardous and cannot be made safe – like the use of explosives. “Some have suggested that [because] drones are dangerous that they should be held strictly liable,” Schechter said.

In a yearlong study, The Washington Post found that 400 large U.S. military drones have crashed in major accidents around the world since 2001, “a record of calamity that exposes the potential dangers of throwing open American skies to drone traffic.”

The practical effect of strict liability is that it would be more expensive to operate a drone, Schechter said. “Amazon would take on insurance and pass the cost onto consumers.”

Would the photographer have a case against TGIFridays for the drone that attacked her face?

It depends on whether the accident was foreseeable, Schechter said. “You are not required to compensate for unforeseeable consequences.”

In an era when our phone metadata is accessible to the government, where cities bristle with security cameras, is that old American right, the reasonable expectation of privacy, outdated?

Schechter sounds pessimistic. “The first week the drones are out there, I have a reasonable expectation of privacy. Once drones become commonplace, the expectation changes.”

It is “tempting,” Ryan Calo, assistant professor of law University of Washington School of Law, wrote on concurringopinions.com, “to conclude that drones will constitute one more nail in the heavy coffin of privacy.”

But Calo wrote that “the proliferation of drones in our skies” could lead to just the opposite – a time when “all of our amorphous fears about new technology watching us suddenly reified and immediate.”

He continued, “It is for this reason that I believe drones could end up being good for privacy law.”

Waiting in the Wings

Howard Melamed is in the business of detecting illegal cellphones in prisons. With his engineering background and expertise in cellphones, antennas and signal enhancement, the South Florida resident founded OpenSky Drones in July.

Drone cameras can inspect buildings for structural integrity and check energy levels of cellular towers, work that is dangerous for people to do, he said. “This is an industry that’s going to be huge,” he said. “We can remove risk from humans. This is what drones are good for.”

The smallest drones in his squadron are 12-inches wide and have four blades. The largest are 3-feet in diameter with eight blades.

It irks him that he’s prevented from sending up his drones while he waits for the FAA to rule on his application for a commercial operation. Meanwhile any hobbyist can buy a drone and fly it.

“How can we have a society where we have hobbyists who have no license, no insurance, but they limit the commercial guys?”

Melamed argues that this is a violation of the 14th Amendment, which guarantees citizens equal protection under the law.

If Melamed ran the FAA, all drone flyers would be required to have insurance, and have ground school pilot training. Law enforcement would shift from a federal to a local responsibility.

“We want hobbyists taken out of the equation,” he says. “In Canada, I can apply for a license and fly a drone. We can just copy Canada.”

Instead, the FAA approves commercial drone use on a case-by-case basis. Five companies were approved this month. Melamed said “there are 100 other applications out there.”

Melamed built on his work of detecting cellphones and developed what he called “DDD technology – drone detection and defeat. It can detect a drone coming into a prison and electronically take it out of the sky.”

He dismissed fears that drones will lead to the loss of privacy (“there are privacy laws for that”), and that they present a danger to the public (“what are the chances of a baseball being hit out of a park and hitting a car?”).

He suggests drone parks be created for hobbyists, the ways skateboard parks and firing ranges allow dangerous activities to be practiced safely and away from the public.

How easily will drones make the transition from delivering missiles in war zones to delivering espresso machines from Amazon in suburbia?

The answer is up in the air.

What makes a tent goodly?

“Fundamentally, Jewish law is focused on duties rather than rights,” he said. “It’s not so much the right to privacy as much as the duty of nonintervention.”
In other words, don’t look, don’t listen, and if you accidentally do, don’t talk about it.

The rabbis of the Talmud based this view of the duty to protect another’s privacy on the biblical story of Bilam, the hapless prophet who was commanded by the king of Moab to curse his enemy, the Israelites.

Bilam tried, but ended up blessing them, saying, “How goodly are your tents, O Jacob, and your dwelling places, O Israel” (Numbers 24:5).

“What is it that Bilam saw that was so distinctive that the rabbis could see as worthy of praise?” Berman said.

What he saw was how the Israelites set up their tents: The openings faced outward, rather than toward each other, so that no one could look into his neighbor’s home.

This midrash was the rabbis’ rationale for arguing that a Jew must build his house with the door facing away from his neighbor. It was his duty to protect his neighbor’s privacy.

“The interior is considered a realm of privacy that a person is entitled to,” Berman said. Private space is an extension of the person, which allows someone to be his or her true self, he said.

A breach of privacy is “a breach of the fundamental dimension of human identity,” he said.
Controversies over the diminishment of privacy by the National Security Agency, law enforcement and, now, drones, are an outgrowth of the Sept. 11, 2001, terrorist attacks, Berman said.

“If not for 9/11, the society never would have tolerated it,” he said. “Since the 1960s we were heading toward ever-expanding privacy – 9/11 changed that. We’re beginning to see a counter-reaction now.”
– David Holzel