Faced with having her aging father move into her house or into a nursing home, a woman from Potomac realized she had no good choices.

If he stayed with her, the woman, who asked that her name not be used, would be responsible for feeding, dressing and giving him his medicine. And her days were already filled with raising her three children and her job as a lawyer.

And it wasn’t like he would be playing with his three grandchildren, ages 7, 12 and 14, who are students at Charles E. Smith Jewish Day School in Rockville. “He’s in his own little world,” she said. Her father, who suffers from dementia, “doesn’t even remember what day it is.”

But if she moved him into a nursing home, she would not “have control over what is happening. I would keep running there,” she said. And she worried that in a nursing home, her father would sleep away the day.

“My life is insanely busy, to add going back and forth, checking on the staff, making sure he has what he wants, that his glasses aren’t lost” would be too much, she said.

She decided to keep her father with her. He has been living with the family for 3½ years. Being a caregiver to an elderly parent with dementia means dealing with a loved one all the time, day and night, with little reward.

“It’s incredibly hard. It’s like having a baby on some level,” she said. “I can’t go away on vacation without arranging” to have someone take care of her father. However, she said, her children are learning the importance of taking care of a loved one.

During the new film Broken Movies, screened Monday at the AFI Silver Theatre in Silver Spring, a son learns to care for his father who has Alzheimer’s disease, dealing with the emotional pain of so many memories and the realization that his father often mistakes him for his own brother.

In one poignant scene in the film, the aging father, portrayed by Rance Howard, turns to his son to ask, “Are we just made up of the memories we hold on to?”

Before the screening, Howard, who is the father of director Ron Howard, spoke to a theater full of caregivers and their families who had come to see the film. Howard, 87, knows about the problem firsthand, having lived through his mother-in-law’s illness. Then, a year ago, his wife was diagnosed with Alzheimer’s.

The disease takes everything from its victims, memories and the ability to do  the things they previously enjoyed, he said.

Alzheimer’s is the sixth-leading cause of death in America. Approximately 5.3 million people have been diagnosed with the disease, which is caused by a buildup of protein in the brain. It is a disease without a cure and without medicine to slow its progression.

Montgomery County Executive Ike Leggett told the group how his oldest sister, who was diagnosed with Alzheimer’s about a year ago, has deteriorated rapidly. “To see that transition from that all-powerful, dominant woman” to someone who needs help is very difficult, Leggett said.

Dealing with his sister has taught him that being a caregiver “really is an act of love.”

Marlene Goldschmidt understands that love. Her 96-year-old mother is a third-generation Alzheimer’s patient. “I, unfortunately, have been going to nursing homes since I was 6 years old,” said the Potomac resident.

Her mother kept a kosher home, ran her husband’s optometry office, sewed, knitted and cooked. “She was incredible,” Goldschmidt said during a recent visit with her mother, Florence Halpern, who lives in the Cohen-Rosen House, a Charles E. Smith Life Community.

Now, her petite mother sits in a wheelchair, fists clenched, staring at a table filled with Legos, dominoes and games, touching nothing. But when her daughter approaches and starts rubbing her back, a smile engulfs her face. Then Goldschmidt leans over and applies lipstick on her mother.

“Sometimes she knows. Sometimes the window opens a little. It’s not very often,” Goldschmidt said. “I still cry. It doesn’t get easy.”

Goldschmidt gets upset when she hears her mother sing Hebrew songs during Shabbat services at the home in Rockville. “How can she know the Hebrew and she doesn’t know who I am?” Goldschmidt wonders.

Other times, she is happy for the time she still has with her mother. “I feel very blessed that I have such a great relationship with her, and I can be with her.”

The visits are easier, now that she follows advice that was given to her a few years ago.

“Don’t try to bring her into your world. Go into hers,” she said, recalling the advice.

“Once I started doing that, there was no frustration. This is my journey, and I gladly do it. She deserves the best.” 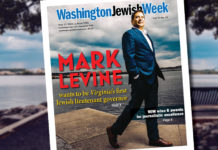 Read the May 13th WJW Digital Magazine by clicking here

Giving credit to the teachers with Steve Mazer