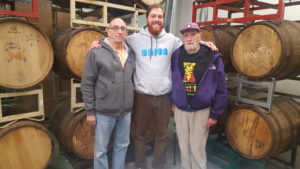 BALTIMORE — At 97, Henry Benesch may very well be the oldest brewery worker in the country.
At least that’s what his son, Jerry Benesch, said he believes during a visit to the nearly 5-year-old Union Craft Brewery here, co-founded by Henry’s grandson, Adam.

Benesch, whom everyone at the brewery lovingly refers to as Zayde, has the fortitude, clarity and rugged good looks of someone at least three decades younger.

A World War II veteran, retired Burroughs Corporation engineer and “regular Baltimoron,” as he put it, Benesch — as with his son and grandson — was born and bred in Baltimore. Today he resides in suburban Pikesville.
Once a week, Benesch gets together with friends — all much younger than he, he pointed out, noting that everyone else “is gone” by now — to enjoy a few drinks, smoke some cigars and play cards (typically petty poker).
Three or four times a week, though, he’s at Union for three or four hours constructing from flat pieces of cardboard as many as 600 case trays a day for six-packs of beer.

As humble as he is sharp-witted, Benesch approximated that his nimble fingers touch “90 percent of all boxes” that go through the Union canning line, with Adam piping in (more than once during the interview) that it’s more like 99 percent.

Whatever the case might be, Adam confirmed “it’s a vast majority of them. That’s for sure.”
“I started to help out when they first began about four-and-a-half years ago,” Benesch said (with Adam stating Union started brewing in June 2012).

“When we started, I was just messing around, making boxes,” Benesch said. “I ran into their tanks with my car and all that.”

Laughing at the recollection with his father Jerry, Adam referred to the salad days of Benesch’s time at the brewery as “a fun project for him to come and visit.”

When Adam couldn’t figure out how much to pay his grandfather for the work in those earliest days of the brewery, Benesch retorted, “You don’t have enough money to pay me! So I volunteered. It helps him, and it gives me something to do. It’s a win-win situation.”

As long as it’s not a full-time job, Benesch said he’s happy.

Of course, now that the brewery actually relies on his work, as Adam noted, if Benesch doesn’t come in one day he’s replaced by a few canning workers who “get upset because then they have to do it,” Adam said.

“Also, they can’t keep up with him,” added Jerry.

“We have a fancy canning line that can’t keep up with him,” said Adam, with Henry complaining, “And the big trouble is: I have to wait for them!”

It’s far too simple to make the connection here to tall-tale figure John Henry, but Benesch does indeed beat the machine, so to speak. But unlike his quasi-namesake, Benesch has kept his life in the process.

“I don’t exercise,” Benesch proclaimed about that “secret to long living” everyone’s always bugging him about. “Exercise will kill you.”

When asked if he at least plays golf or bowls, he’s quick to respond, “No, that’s exercise.”

Is the secret to a long, healthy life a good diet?

“No,” Benesch replied. “I usually have dinner four or five times a week with Marie. I don’t have any arguments with her, and she’s nice.”

Benesch here is speaking of Marie Callender’s, popular purveyors of what the company calls “Frozen Meals the Whole Family Will Love.”

“I don’t pay any attention to [what I eat],” Benesch said. “And finally the doctor says, ‘Keep doing what you’re doing. What else can I say?’”

The secret, then, may very well be in Benesch’s volunteering at the brewery, which he refuses to refer to as “work,” qualifying it as “just passing my time and occupying myself.”

And if he can help out his son — who works as a de facto bookkeeper helping to run the financial end of the brewery — and grandson — who runs just about everything else with co-owners Jon Zerivitz and Kevin Blodger — at Union, so much the better for everyone.

“Everybody says, ‘Why do you look so young?’” Benesch said. “Look around: ain’t nobody old working here. All my friends are younger than I am.”

“It’s cool to see your family be part of this business you set out to do,” Adam said. “But I certainly didn’t expect my grandfather to be working on a daily basis when we set out. It’s certainly a welcome addition.”

As far as long-term goals, Benesch, the affable nonagenarian who shrugged off the compliment by his son and grandson of “wise old man,” had this to say: “They promised me I’m going to have a room of where I can sit down all day and make 1,000 cases a day.” n

Mathew Klickstein is senior reporter at the Baltimore Jewish Times.