For those unfamiliar with the story of Mosab Hassan Yousef, it might sound like a fictional, psychological spy plot from Homeland. But the true story of Yousef, a Palestinian – and son of Hamas founder and leader Sheikh Hassan Yousef – who worked undercover for Israeli intelligence for 10 years, is brought to life in Nadav Schirman’s new documentary The Green Prince, which opens in D.C. area theaters Friday.

The film is based on Yousef’s 2010 best-selling autobiography, Son of Hamas, which tells the story of how Yousef was recruited by Israel’s internal security service as a teenager to spy on Hamas, and the relationship he developed with his Shin Bet handler Gonen Ben Yitzhak. Schirman’s film puts the two front and center as they recount the complex, perilous escalation of Yousef’s long con that lasted from 1997 to 2007, and the evolution of their uneasy relationship as the two enemies became allies over time.

A collaboration with Oscar-winning documentary producers Simon Chinn and John Battsek (Man on Wire, Searching for Sugar Man), Prince won the Audience Award for World Documentary at the 2014 Sundance Film Festival, a response that Schirman hopes to witness again with audiences in the area.

The Israeli documentarian was inspired to make the film after he read Yousef’s memoir in two hours, and was fascinated by his changing point of view on Hamas and the relationship between Yousef and Yitzhak.

“Their relationship gave me a feeling of hope. I felt it tangibly, like something was pinching me,” Schirman said. “Understanding the nature of their relationship is what propelled me to do this film.”

The main characters are the only two who provide commentary through interviews during the film, which is intertwined with sparse archival footage and aerial shots giving off a vibe of danger that surrounded Yousef’s spying endeavors and prison time.

“It’s not enough to be telling the facts. I’m not a journalist. I’m a filmmaker, and I’m interested in the characters’ emotions and the audiences’ emotions,” he said. “The most important thing was to create an emotional platform for this narrative. They had the courage to let me lead them into these dark corners of their own narrative.”

Schirman said that in the original cut, more interviews were included, such as the head of Shin Bet and other specialists. The crew decided to cut it down during the editing process, and rebuilt the narrative as a narrative of their relationship. He was also aware that a film like Prince could easily be made into a political documentary, which is why he focused on Yousef and Yitzhak’s personal journey.

“This is not a political film at all. It’s a very human drama. It’s very universal, in a way,” he said. “We were very careful to try to carve out the politics. Yes, you can’t escape the politics that are background for the story. But the story could have been between an Irish and a British, between a Chinese and a Korean. It could’ve been so many blends of conflicts.”

Although there are many twists and turns that occur during the film’s intense storytelling, the story is simple in Schirman’s eyes.

“Ultimately for me, it’s a story about these two guys who individually followed their own moral compasses and dared to go against the flow.”

The Green Prince is rated PG-13 and premieres Sept. 12 at Bethesda Row Cinema. 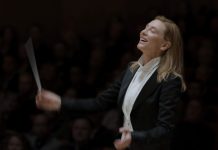