At 71, Hana Berger Moran, Mark Olsky and Eva Clarke have more in common than just their age. They were all born in or on their way to Nazi concentration camps, making them among the Holocaust’s youngest survivors.

All three attended the annual Days of Remembrance event in the U.S. Capitol on May 5. They say they found out the circumstances of their births at young ages, but did not understand the horrors of the Holocaust until later. Clarke said her mother told her the story in “tiny snippets.”

“I came home from school and I found a brown suede shopping bag on the back of the kitchen door, and it had the letters AN,” Clarke said. “My mother’s name was Anka.” But Clarke’s father’s name didn’t begin with N.

“And she sort of took a deep breath, and she said, ‘You’ve heard about the war. … You had two daddies. One daddy was killed in the war and now you have another daddy.’ That’s all she said.”

Clarke’s biological father was a German who fled the country in 1933 to escape persecution by the Nazis. He met Clarke’s mother in Prague and the two married in 1940 and were sent to the Theresienstadt concentration camp a year later.

In the camp, the sexes were separated to avoid the reproduction of Jews, Clarke said.

Her brother George was born in Theresienstadt in 1944, the same year Clarke’s family was transferred to Auschwitz-Birkenau. George died of pneumonia at age two months.

“His death meant my life and my mother’s,” she said. “Because had my mother arrived in the Auschwitz-Birkenau death camp with my brother in her arms, she would have been sent straight to the gas chamber.”

Clarke was born in April 1945, the same month Auschwitz was liberated. Clarke said her mother weighed as little as 70 pounds when she gave birth.

“She had a very optimistic nature, and despite seeing all the death around her she always thought she’d survive,” she said.

For Olsky’s mother, it was a piece of a foul-smelling vegetable that she found on the ground that sustained her.

“My mother said that about a month before I was born, she found a rotting head of cabbage, and it had things crawling on it, and it smelled awful,” he said. “She said it was the best thing she ever tasted, and she was sure that was part of why she was able to survive. She said one of the German guards saw her pick up the cabbage. Normally she would have been beaten or killed for it. This guard turned out to be kinder than most and stood there and watched her eat it and didn’t say anything.”

Olsky was born on April 20, 1945, in a cattle car on a train that was making a 17-day journey from Freiberg, Germany, to the Mauthausen concentration camp. The Americans liberated the camp on May 5, just as mother and son arrived. Olsky spent his childhood in Germany and Israel, where it was common for people to have lost several family members in the Holocaust.

“It just seemed like a normal part of life,” he said.

Olsky, now a doctor in Madison, Wis., met Clarke and Moran six years ago during the 65th anniversary of the Mauthausen liberation.

Moran, who was born in a forced labor factory in Freiberg, said her mother told her about her birth when she was 8, but did not make a big deal of it.

“My mother explained to me that her parents, her sister and other relatives were killed in the concentration camp, as well as my father, because they were Jewish, and I replied that I want to be Jewish, too,” she said. “Her way of life was not to dwell too much on the horrors and the sadness, but to be very positive. So anything she said was, ‘We’re here, we survived and life is for the living.’”

The three were the subjects of a book published last year, Born Survivors by British writer Wendy Holden. Holden attended the Days of Remembrance event as part of a book tour. She said her project began a few years ago when she learned that a woman in Canada who had had a baby and survived Auschwitz had died.

“I thought, gosh, I wonder if any babies ever survived the Holocaust,” she said. “And I did a search, and I couldn’t find any books about anyone or anything, because they were all killed. And then Eva’s name came up, and by luck she lived an hour from me, so I went and spent a day with her. And at the end of the day, I asked if she would do me the very great honor of writing her great story.”

When the two met, Clarke touched Holden on the shoulder and said she had been waiting for her for 70 years. Clarke then told the writer about two other survivors who were born during the Holocaust.

“Once I realized how close they’d become, I knew I’d have to encompass all three,” Holden said. “You can’t identify with 6 million, but you can identify with three young mothers.” 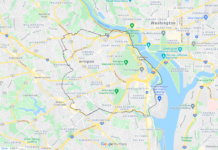 NoVa to be ringed by two ritual enclosures