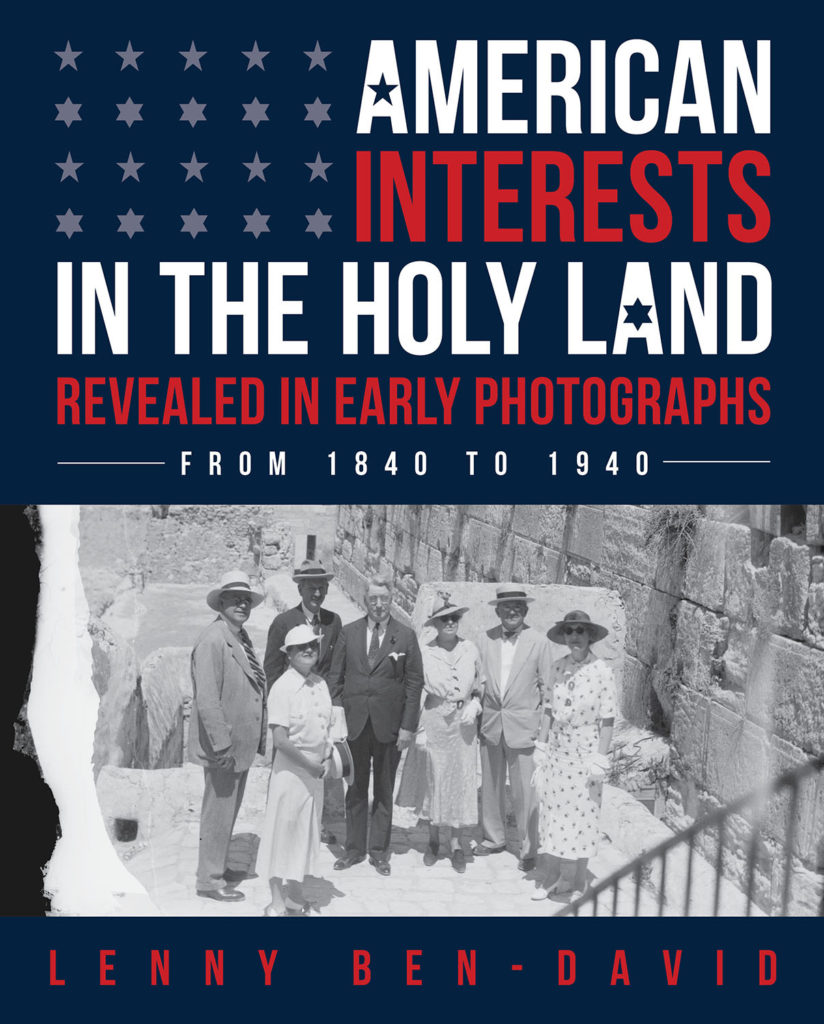 There’s the Kotel, the Western Wall of the Temple, in 1859, not appearing radically different than it looks today. From a different angle, we see the Wall, and above it, the Temple Mount with its mosques and their neglected environs.

Then, we are shown tourists outside Jerusalem in 1867, whom some believe were Mark Twain’s companions on his tour of the Holy Land. And we witness the international nature of the Jewish community living in the Land of Israel, with Polish Jews staring into a camera in 1867, while their counterparts from Yemen do the same in an image circa 1900.

These photographs and dozens of others, culled from the Library of Congress online collection and the digital collections of many other libraries and institutions, are the heart of this intriguing book. It was cobbled together by Lenny Ben-David, former deputy chief of mission at the Israeli Embassy in Washington.

If a photo is worth a thousand words, then American Interests in the Holy Land is a source of encyclopedic knowledge.
Many of the photographers were American Christians — visiting or living in Turkish, and later British Mandatory, Palestine.

They benefited from two 19th-century inventions — the steam-powered ship and photography — enabling their trips and their documentation of life in the Holy Land, Ben-David notes.

Famous visitors’ snapshots include author Mark Twain, President Ulysses S. Grant and a 22-year-old Robert Kennedy, who traveled to Israel in 1948 as a reporter for the now-defunct Boston Post.

And, as the book documents “American interests in the Holy Land,” many images have an American dimension. There is a steamroller built in the USA, flying both an American and a Turkish flag as it works on the streets of Jerusalem around 1912; the miserable-looking American Colony (a missionary group) encampment near Jaffa in 1866; and an 1885 photo of American preacher Mendenhall John Dennis and his family, noting that the converted Jew had been Mendel Diness of Jerusalem before 1860.

The inclusion of some photographs, however, seems to be a long, uncomfortable stretch.
President Abraham Lincoln’s photo appears only because days after his assassination, his widow told the pastor who presided at the martyred president’s funeral that Lincoln had yearned to visit the Holy Land.

A photo of the original Adas Israel Congregation building being moved to a new location in 1969 is shown because President Grant attended the Washington synagogue’s dedication in 1876.

President Calvin Coolidge and baseball legend Walter Johnson of the Washington Senators are shown shaking hands at a baseball game in 1924. Why? Because on the same day in the White House, the president met Rabbi Abraham Isaac Kook, the Orthodox rabbi credited with being “the father of religious Zionism.” Yes, there are some long photographic stretches.

But this book is much more than just a collection of images. It also demonstrates the deep connection that American Christians have felt toward the Holy Land and their abiding sympathy for the return of the Jewish people to their homeland.

The narratives surrounding the photos provide their context, helping them to come alive.

One such story concerns an American naval officer, William Francis Lynch, who made a trip to Palestine in 1847 to explore and map the Jordan River and the Dead Sea. A supporter of Jewish “restoration” in the Holy Land, he visited the 1,000 people-strong Jewish community of Tiberius. He noted the “fervid zeal” of worshipers in synagogues, and wrote optimistically that breaking the power ruling the area (meaning the Ottoman Empire) “will ensure the restoration of the Jews to Palestine.”

Former Secretary of State William Seward visited Jerusalem in 1871 and reported on the demographics of the city. The “Mohamedans” numbered 4,000; the Christians, including Armenians, also came in at 4,000; but the most numerous group in the city was the Jewish community comprising 8,000 souls.

Mark Twain wrote “The Innocents Abroad,” his travel book through Europe and the Holy Land, in 1867. On Jerusalem, his disappointment was palpable, saying that the city “has lost all its ancient grandeur, and is become a pauper village.”

On Palestine he was equally appalled. “The hills are barren… . The valleys are unsightly deserts fringed with a feeble vegetation that has an expression about it of being sorrowful and despondent. … Palestine sits in sackcloth and ashes.”

As part of his world tour in the late 1870s, Grant visited Jerusalem. His thoughts were conveyed through John Russell Young who wrote of Jerusalem: “As you slip over the rough cobble-stones, and fall into ruts, stumble on broken roads, and go through the noisome streets where life seems a fermentation, it is hard to feel even in its holiest and sunniest days Jerusalem could have been ‘the perfection of beauty, the joy of the whole earth.’ ”

American interest in Palestine — and concern for the Jews living there — continued into the 20th century, as seen in a 1922 joint congressional resolution, signed by President Warren Harding, supporting the Balfour Resolution’s promised national home for the Jewish people, notes Ben-David.

Following a mission to Palestine in 1937 to investigate the situation, New York Sen. Royal Copeland introduced a resolution opposing British proposals to partition the country.

Almost everything written about the Jewish homeland is in essence political, and “American Interests in the Holy Land” is no exception. For books about the Land of Israel or Palestine inevitably become entangled in the conflicting Arab and Jewish narratives of what has transpired during the past 150 years.

In the Arab version of history, the state of Israel was given to the Jewish people by the guilt-ridden West because of the Holocaust.

The Zionist view is Jews have maintained a presence in the land even after the expulsion by the Romans 2,000 years ago.

Zionism is simply the return of the mass of Jewish people to their ancient homeland.

This book’s photos and their narratives seem to support the latter view.