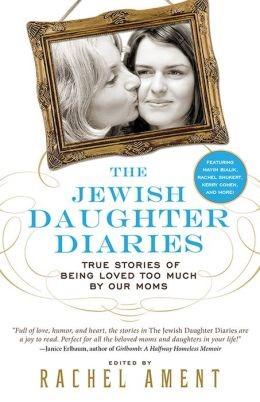 When God created the Jewish mother, He took a blob of challah dough and added a hefty dose of “Worry,” “Yenta” and the unbelievable talent of making perfect brisket.

From that same blob, God gathered a smaller drop, to which He added a dash of “rebellion,” a hint of “eye-rolling” and the tremendous fortitude to crawl
inwardly when mom recounts tales of your pubescent acne to your boyfriend. From this biological recipe, the Jewish daughter is woven.

In The Jewish Daughter Diaries: True Stories of Being Loved Too Much By Our Moms, Washington writer and editor Rachel Ament has collected 27 stories from modern Jewish daughters who try to capture the essence of the intricate recipe they call “mom.”

Ament’s anthology reads much like a witty and personal blog from a friend, stories that will make readers think to themselves, “I don’t remember being interviewed for this book.” Ingeniously portrayed, The Jewish Daughter Diaries explores the difficulty of casting a single defining mold for the Jewish mother — some mothers are stereotypical while others are unpredictable.

These true-life stories are written by American Jewish journalists, performers and artists, including Mayim Bialik, best known for roles in Blossom and The Big Bang Theory. Former NBC’s Last Comic Standing winner and book contributor Iliza Shlesinger shares stories of her mother making the bed with Iliza still sleeping inside, and requests from her mother to have her ashes kept in her daughter’s underwear drawer. This anthology is a toast from sweetly (s)mothered daughters, in honor of their unique Jewish mothers.

After reading it, I found solace in realizing that I am not the only one with a crazy Jewish mother. Like an uncannily devoted, urban rooster, she is the one who called from the staircase, stormed into my bedroom 10 minutes later to find me still asleep, and shuffled me into carpool dazed and confused holding a brown lunch bag and with my shirt on backwards. In middle school, she told the wrong twin brother, “My daughter has a crush on you.”

Because of my crazy Jewish mother I am who I am today — funny stubborn, and unpredictable. I plan on sending her a copy of The Jewish Daughter Diaries. She may find it comforting to know that she is not the only one with a crazy Jewish daughter.

I spoke to Ament about The Jewish Daughter Diaries:

What inspired you to put together an anthology about Jewish mothers?

Rachel Ament: I’ve always just been very charmed by stories about Jewish mothers. I tend to like stories that are familiar and relatable, but also unexpected.

What do you feel is uniquely different in a mother-daughter relationship from that of a mother-son relationship?

I think there is something special about the bond between mothers and daughters. They have been on the same womanly journey. They connect in that deep,
secretive way that women do.

How did you decide on story contributors?

Which story was your favorite to read?

The story that had me laughing out loud at a library to the point that it was suggested I go out into the hallway was Lauren Greenberg’s story “JDate My Mom,” which was about how her mom set up a Jdate account for her and then began emailing potential dates for her.

Have you come any closer after compiling this anthology, to defining the Jewish mother?

I think Jewish moms tend to live in the extremes: they love too much, they worry too much. There are, of course, Jewish moms who don’t fit into this mold but I don’t think that this should prevent us from being able to bond over what
connects so many of us. We should never be afraid of talking about and laughing about ourselves. Nothing has helped Jewish people gain acceptance into mainstream culture more than humor.

What does your mom think of the book?