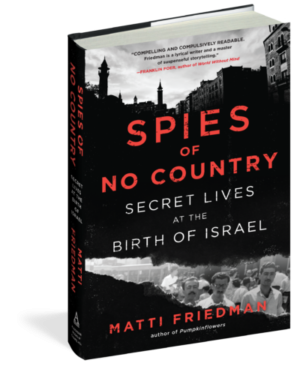 I’ve always believed that when it comes to modern miracles, our miracle assessors — sort of the functional equivalents of the pope and what he does for saints — have overlooked an obvious candidate: the victory of the Jews in the Israeli War of Independence.

In 1948, some 800,000 Jews living in the land of Israel were able to put together a small army. But, at least in the beginning of the war, it almost completely lacked the accoutrements of modern warfare: tanks, artillery, military aircraft, machine-guns, anti-tank bazookas and even a sufficient supply of rifles.

It faced relatively well-equipped armies from Egypt, Transjordan, Syria, Iraq and Lebanon plus Palestinian guerrillas and volunteer soldiers from other places in the Arab world.

But that was before I read “Spies of No Country.” For with courageous men like Gamliel Cohen, Isaac Shoshan, Havakuk Cohen, Yakuba Cohen and other Jews who formed the Arab Section — Israel’s first attempt at espionage, the agency that preceded the Mossad — maybe God decided that his people could get the job done on their own.

The story of these men is not that of super-efficient Israeli agents. On the contrary, these men were not well trained, often poorly led and always woefully under financed. Not only that, but they began their work before Israel was officially established.

“They had no country — in early 1948, Israel was a wish, not a fact,” writes author Matti Friedman, a journalist living in Jerusalem. “If they disappeared, they’d be gone. No one might find them. No one might even look. The future was blank. And still they set out into those treacherous times, alone.”

They were Jews from Arab countries and knew Arabs and Arab customs. Nonetheless, they required many hours of training.

“The recruits were from the Islamic world, but at home they had known little of the majority religion beyond the dangers it posed to people like them,” Friedman writes. “Now they learned laws, scripture, superstitions, and figures of speech.”

Because, prior to their induction into the Arab Section, the boys had lived among the Ashkenazim (European Jews), who were notoriously lacking in politeness, they also had to be taught to be polite, which is so important in Arab society.

Even before being sent into neighboring Arab countries to gather intelligence and carry out sabotage missions, the men had been traveling to Arab towns in British Mandatory Palestine in the years before the war, seeing what worked and what didn’t in passing as Arabs and bringing information to the Haganah’s Information Service.

In 1948, Isaac Shoshan went into the Arab section of Haifa and spotted a truck painted with red crosses, like a British ambulance. He reported what he had found, and Haganah Intelligence learned that the truck was to house a bomb to be detonated outside a Jewish Haifa movie theater. Haganah bomb makers built a bomb, put it in a car and blew it up near the disguised truck, thwarting an Arab operation that might have killed and wounded dozens of civilians.

Later, the men were sent to Arab countries. One of the more interesting operations they carried out was an attempt to destroy a yacht in Beirut that had belonged to Adolf Hitler and was being refitted to be used by the Egyptian Navy.

The ship had been designed for Hitler’s grand entrance to London after the Nazis conquered Britain. When that didn’t happen, the ship was used by Grand Admiral Donitz to announce Hitler’s death in 1945 and assume leadership of the Nazi state. In 1948, Israel intercepted a letter, which stated that there were 20 escaped German POWs in Beirut who were working on the yacht.

The Israelis wanted to sink the yacht because it was to join the Egyptian Navy. But the fact that it had belonged to Hitler certainly was an added incentive.
The operation badly damaged the boat, which later was sold to an American buyer to be used for scrap.

For a “classical model” of a mission, it would have been preferable if the ship had been destroyed, killing many Nazis, the author writes. “Instead, we have the expenditure of great effort and bravery based on information that was murky and possibly misunderstood … tripped by technical glitches, all for an effect impossible to predict beforehand and hard to measure afterward. For a true spy story, this indeed may be the classic model.”

This very readable book is chock full of poignant moments. One of the most moving involved Isaac Shoshan, who got to eastern Jerusalem, under Jordanian control, in 1949 and saw western (Jewish) Jerusalem, the capital of the new Jewish state, for the first time from the ramparts of the Old City. Most of his time in Beirut had been spent in his fake identity as an Arab businessman, running a kiosk, “selling sandwiches and erasers to schoolchildren.” He hadn’t seen the Jewish state, which was “just clicks through a radio.”

“And then there it was, people walking on the street, their babies crying, their poor laundry drooping and electric lights shining, Isaac’s own people buying, selling, living under the guns of the Jordanian sentries along the wall … right here, right in front of him … the State of Israel.”

Aaron Leibel is a former editor at The Jerusalem Post and Washington Jewish Week. His novel, “Generations: The Story of a Jewish Family,” is available at amazon.com and in Kindle format.