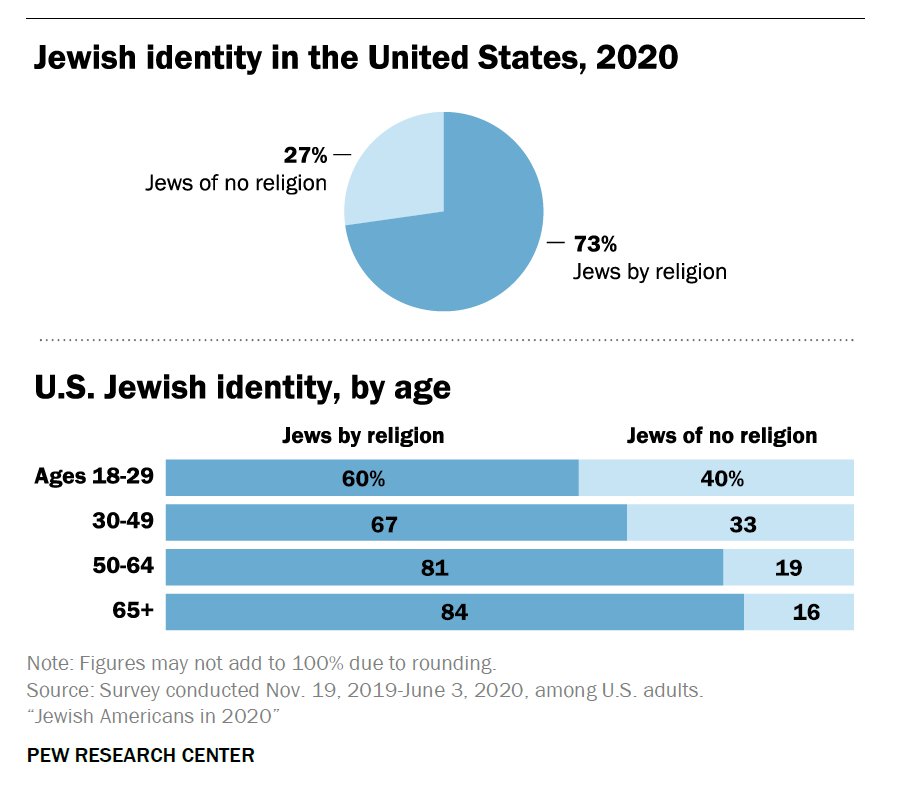 “Jewish Americans in 2020,” Pew’s first deep dive into Jewish life in the U.S. since 2013, paints a picture of a population that is diverse politically and religiously, but for whom, overall, “being Jewish” remains important.

Pew’s newest survey of Jewish Americans was conducted from November 2019 through June 2020, with most of the work completed before the pandemic. Its methodology differed from the 2013 survey in that it was conducted online and by mail rather than by phone.

While the 2020 study shows few significant changes in statistics from 2013, it does “clarify” some trends, said Alan Cooperman, director of religion research at Pew Research Center, in a call with media last week.

“You can get a kind of ‘aha!’ moment out of the survey where it shows you something that, yes, it makes a lot of sense, but you hadn’t been able to crystalize it until that moment when you saw it in the data,” he said.

Growth in Orthodoxy and non-religious
Cooperman said that “aha!” moment came through the data showing the “religious divergence” of the Jewish population, particularly among young Jewish adults.

The 2020 survey found that younger Jews contain among their ranks “both a higher share who are Orthodox and a higher share who are at the very low end of the religiosity spectrum,” Cooperman said. “If you are familiar with the American Jewish community, you’ve seen the growth in Orthodox neighborhoods, communities across the country. It’s not surprising, but the survey does capture that.”

In fact, 17 percent of Jews 18-29 self-identify as Orthodox. At the other end of the spectrum, four in 10 Jewish adults under 30 describe themselves as atheist, agnostic or “nothing in particular,” but still identify as Jewish for ethnic, cultural or family reasons.

Overall, 27 percent of Jewish adults who have a Jewish parent or were raised Jewish do not identify with Judaism as a religion, the survey found; and younger Jews identify with the religion at a lesser rate than older Jews. While 60 percent of Jewish adults under 30 identified as “Jewish by religion,” that figure jumped to 84 percent for Jews 65 and older. Likewise, 37 percent of Jews under 30 say they are Conservative or Reform, compared to 60 percent of those 65 and older. Those numbers have not changed significantly since 2013.

In general, Jews are less religious than American adults as a whole, Pew found. While 21 percent of Jews say religion is “very important,” 41 percent of all U.S. adults say the same. And only 12 percent of Jews attend services at least once a week, compared to 27 percent of the general population

Still, regardless of formal affiliation or religiosity, three-quarters of U.S. Jews say that “being Jewish” is either very or somewhat important to them. Most Jews — 85 percent — say they feel either “a great deal” or “some” sense of belonging to the Jewish people.

The problem is apathy
For Jews who rarely, or never, attend synagogue services, Pew asked what was keeping them away. While conventional wisdom has suggested that many Jews do not attend synagogue because they don’t feel welcome or because they cannot afford the dues, the most common reason — given by two-thirds of the Jews surveyed — was “I’m not religious,” and more than half said they are “just not interested” or they have alternate ways to express their Jewishness.

“Part of what Pew is helping us as a community to see is that the problem is apathy,” said Michelle Shain, assistant director of the Center for Communal Research at the Orthodox Union in a call with media. “It’s not that people see a closed door. They see an open door and they aren’t interested in walking through it.”

The lack of synagogue attendance may indicate “religion is not central to the lives of most U.S. Jews,” but Jewish Americans are not, on the whole, apathetic, countered Arielle Levites, managing director of the Collaborative for Applied Studies in Jewish Education at George Washington University, in the call. 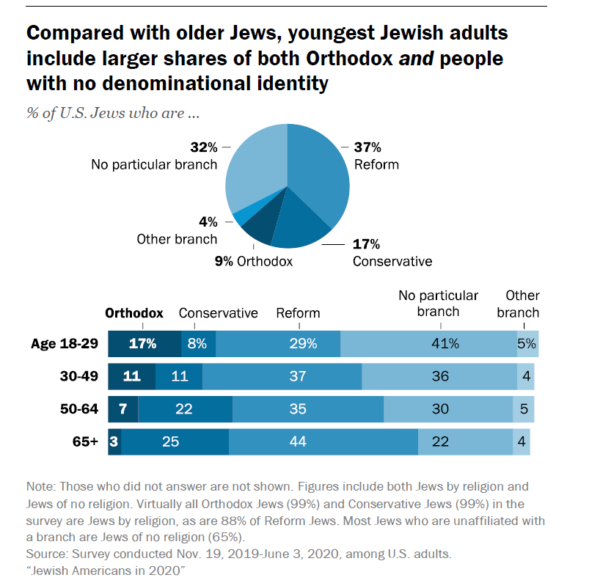 Intermarriage rates in 2020 are similar to those in 2013, Cooperman said, showing “some stability there that some people may not have expected.” While it appears that over the long-term intermarriage rates have risen, there is no evidence in the survey “of any additional rise between 2013 and 2020,” he said. But, “absence of evidence is not necessarily the same thing as evidence of absence. So these are estimates.”

Interracial and ethnic intermarriage is rising
There is almost no intermarriage in the Orthodox community, according to the survey, which found only 2 percent of Orthodox Jews had a non-Jewish spouse.

“In other words, it appears that the offspring of intermarriages have become increasingly likely to identify as Jewish in adulthood,” according to the Pew report.

Still, children with two Jewish parents are overwhelmingly more likely to be raised Jewish than those of intermarriage. “Intermarried Jews who are currently raising minor children (under 18) in their homes are much less likely to say they are bringing up their children as Jewish by religion (28 percent) than are Jewish parents who have a Jewish spouse (93 percent), although many of the intermarried Jews say they are raising their children as partly Jewish by religion or as Jewish aside from religion,” the report states.

Married Jews with one Jewish parent are intermarried at the rate of 82 percent compared with 34 percent of those with two Jewish parents. And more Jews say it is important for their future grandchildren to share their political convictions and to carry on their family name than to marry someone who is Jewish (64 percent to 44 percent).

The Chabad question
Pew added a question in its 2020 survey about participation in Chabad activities after “taking heat” for not including a separate question about Chabad in 2013, said Cooperman.

The study found that 16 percent of Jewish adults in America often or sometimes participate in Chabad programs or services. Of those, 24 percent are Orthodox, 26 percent are Conservative, 27 percent are Reform and 16 percent are not affiliated with any particular branch.

Other findings in the survey include the political divergence of the American-Jewish population. While 71 percent of Jews are Democrats or lean Democrat, 75 percent of Orthodox Jews are Republican or lean Republican.

Almost all Jews (90 percent) say there’s at least some antisemitism in the U.S., with one third saying they have experienced antisemitic remarks in their presence.