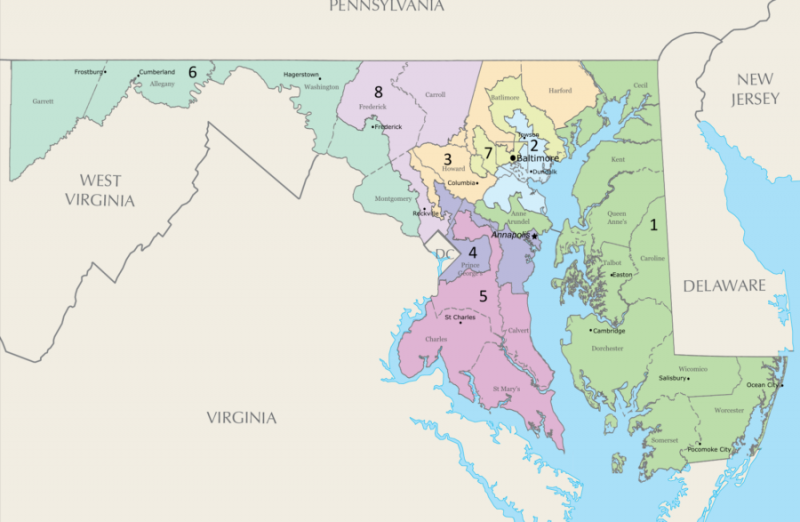 Last month, in partial response to newly published 2020 census data, Maryland’s state legislators approved a redistricting plan. Democrats, who make up the majority, were in favor of the changes. The Republican minority opposed them. Republicans say it will give Democrats an unfair advantage in elections. And they are right. But the issue is whether the redrawn lines are legal — not whether they are logical or pretty. Democrats are betting that the fanciful, jigsaw puzzle-like map they have configured will be accepted by the courts and hope to ride their map to statewide victory.

The U.S. Constitution says nothing about how congressional districts should be drawn. But the law in many states, and the belief of most Americans, is that congressional districts should be compact, contiguous, fairly represent minorities and contain a relatively equal number of people as other districts in the state. But under Maryland’s new plan, for example, Rep. Jamie Raskin’s 8th District begins with a thin tail running through the Maryland suburbs of Washington, D.C., and then balloons in the north of the state before ending at the Pennsylvania border. In the process, the Kemp Mill community in Silver Spring was cut out of Raskin’s district and transferred to the district of Rep. John Sarbanes, of Baltimore. Similarly, the 1st Congressional District — which the state’s lone congressional Republican, Andy Harris, represents — covers the Eastern Shore, then jumps the Bay and stretches to the outskirts of Baltimore. The reason for the shifts is simple: The new configuration will make it harder for Harris to be reelected and easier for a Democrat.

The maps gamesmanship is the result of gerrymandering — the antidemocratic practice of elected officials to choose their voters in order to reduce the chance they are voted out of office. It’s the method by which a political majority seeks to expand its power. It has nothing to do with efforts to draw fair maps. Gerrymandering has been with us for a long time. The practice was named after Elbridge Gerry, a governor of Massachusetts who, in 1812, signed a bill to create a new map in his state that included a district that looked like a salamander. Since then, it has been taken to an artform — aided by new technologies and high-paid consultants — that ignores any pretense of fairness and is instead focused on maintaining party control.

While in Maryland it is the Democrats who are drawing the unjust maps, Republicans are doing the same thing across the country, wherever they have control. Advocates for voting reform often call for bipartisan or independent committees to draw electoral maps instead of partisan legislators. A significant number of states have some form of this approach in place, and we would like to see more states follow.

Gerrymandering is part of a disappointing race to the electoral bottom that goes against fundamental principles of representative democracy. Until both parties agree to stop, the real losers will continue to be American voters.

The Catch-22 of the West Bank