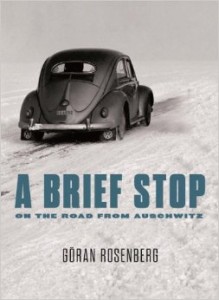 Two tragedies ruined the life of Göran Rosenberg’s father, once a third-year student in a Polish textile college.

The first was the Shoah, which ripped him from his world, then destroyed it. The second took longer, starting at age 24, when he and 30,000 other survivors were brought to Sweden for rehabilitation.

That station was at a town called the author calls “the Place,” Södertälje. For other survivors, it’s a pause on a journey, often to Israel or the United States. David Rosenberg’s tragedy is that he stayed. Södertälje is where his life began anew, then stagnated and, in mental illness, ended.

The author, a well-known writer in Sweden, captivatingly retraces his father’s road to Södertälje, starting with deportation to Auschwitz, which David Rosenberg reached Aug, 26, 1944, in the last shipment of Jews before the destruction of the Lodz ghetto. From Auschwitz, he was sent to Germany to weld axles in a truck factory, then to an ammunition plant that soon closed because of American shelling. The prisoners were put into open freight cars that wandered for nine days until they were unloaded at Ravensbrück; one third were dead.

After hospitalization, he and other Lodz survivors were sent to Swedish a rehabilitation camp, then to a small town, “a no-man’s land between a world that is no longer and a world that is still unreal…a waiting place for a connection not yet established.” He got work in a textile factory, then sent for his prewar girlfriend, who had survived Auschwitz, and they married.

He came to Södertälje on Aug. 2, 1947, where he worked in its prospering truck factory. His wartime experience got him a job welding fuel pipes on truck chassis and a decent-enough income with large benefits, including a forgivable loan toward building a house. Outwardly, he was creating a happy middle-class life, and he sought to advance, taking correspondence courses toward completing his education. But factory management was content to leave him where he was.

While hiding the effects of his trauma from his son and daughter, Göran Rosenberg says, his father became increasingly debilitated by his past. He applied for 1950s German reparations, but was rejected as insufficiently disabled. Ultimately, he was overwhelmed by both his past and his present.
A Brief Stop, which has sold more than 200,000 copies in Sweden – with a population of 9.6 million only half that of New York state  — begins rather slowly, many of its first 44 pages focused rather darkly on the author’s childhood in a world in which his parents don’t quite fit. It’s an unusual work, the author using first person to narrate a story about his father, sometimes — as if it were possible — by speaking to him, even in the same sentence.

For example: “Jewish survivors become, in short, a human category all their own. Shipwrecked, you call them in one of your letters.”

Some sentences are lengthy streams, others are abrupt; after a while you become accustomed and the style isn’t as distracting. Through translator Sarah Death, the language is clear and direct, even if its structure requires a little thinking.

Most of the book is about the father’s effort to live normally, stranded with his memories amid Swedes unaffected by the war, “in a place that never becomes home to you.” But the most heart-rending two pages are a flashback to Lodz: a translation of ghetto “eldest” Mordechai Chaim Rumkowski’s anguished speech on Sept. 4, 1942, conveying the German demand to surrender for deportation all children younger than 10.

It’s no wonder that Göran Rosenberg writes: “Not being able to take the step from surviving to living, always having to live with your survival as the central element of your existence, is a kind of insanity, I suppose, even if it’s not necessarily the survivors who are insane.” n