Theodore Ralph Dorf, of Rockville, died on Dec. 25 after a long battle with cancer. He was 94. After serving in the Army during World War II, Ted returned home and graduated from Temple University. Following college, he started what would become a long career in radio broadcasting, eventually becoming the vice president and general manager of WGAY and WWRC.

Ted was a loving husband to the love of his life, Joan; a devoted father to Caren (Zak Kreisman) and Mark Dorf; an incredible grandfather to Howie and Jesse; and a caring uncle to many nieces and nephews. Donations can be made to Aplastic Anemia and MDS International Foundation: 4330 East West Hwy. #230, Bethesda, MD, 20814. Services entrusted to Sagel Bloomfield Danzansky Goldberg Funeral Care. 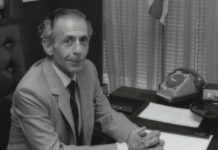