On a recent Sunday, Luke Cohen, Juliet Franklin and Rigby Zentner sat on a playground, talking about who they were inviting to their joint b’nai mitzvah.

“We invited some people from the club, right?” said Juliet, referring to the anti-hate club the three friends belong to at Alice Deal Middle School in Washington.

The 13-year-olds had just finished a session of practicing their speeches — all of which focus on their shared passion for social justice. Now they were tossing out the names of songs they thought should be played at their b’nai mitzvah — “The Man in the Mirror,” “Don’t Stop Believing.” They agreed the opening number should be the humanitarian anthem “We are the World.”
Luke, Juliet and Rigby have spent the last year going to marches with their parents, following current events and promoting tolerance at their school. Friends and neighbors most of their lives, they attend Machar, the Washington Congregation for Secular Humanistic Judaism, and have incorporated those experiences into projects for their b’nai mitzvah, which is scheduled for June 2 at Sixth & I Historic Synagogue.

Juliet chose to study the civil rights movement and researched Jews who were involved, such as businessman and philanthropist Julius Rosenwald, who opened schools for African Americans across the South. She also took a trip with her family to Alabama last December to see civil rights sites.

They walked across the Edmund Pettus Bridge in Selma, where Alabama state troopers beat up marchers in 1965. But it was the National Voting Rights Museum and Institute in Selma that most surprised her, when she learned African Americans once had to pass literacy tests to vote.

“And it was impossible to get the right answers,” she explained. “If they got even one word wrong they would fail.”
The visit prompted Juliet to volunteer with her father at a March voter registration event in Washington, hosted by the organization Rock the Vote. The event took place one day before the March for Our Lives against gun violence. Juliet said she plans to volunteer at more voter registration drives this year, in preparation for the midterm congressional elections.

Rigby has also been involved with social justice. She attended last year’s Women’s March and this year’s March for Our Lives, which she said illustrated the power of her generation to have an impact on society.

“The Parkland students showed me that even though I’m young I can make a difference, too,” she said, referring to the Florida town where 17 high school students were killed in a school shooting.

For her speech, Rigby chose to study Jewish immigration to the United States at the beginning of the 20th century, as well as the current international refugee crisis.

To gain a better perspective of the refugee experience, she asked her teachers what she could do to help immigrants. They connected her with a family who immigrated from Cameroon last year. Rigby has been helping tutor the family’s daughter, Angela. Rigby said she helps Angela with her homework in English and math every week, and has gained empathy for immigrants who must restart their lives.

“I feel like I’ve gotten really close with Angela,” she said. “I understand more what it’s like to go to a new school or a new country.”

Rigby, Luke and Juliet have all become involved in a new club at their school called “No Place for Hate,” which promotes tolerance and opposes bullying. Luke started the club, which is sponsored by the Anti-Defamation League.
Luke said that he wanted to undertake a mitzvah project that deals with hate, due to the number of anti-Semitic incidents that occurred in 2017, including the deadly demonstration by white supremacists in Charlottesville last August.

“That was really b

ig, anti-Semitic and very hateful,” he said of the Charlottesville rally. “That was a terrible thing that happened.”

Luke said his goal in starting an anti-hate group is to set a good example for future generations.

“By making people feel like hate is a terrible thing, we can pass it on to other people,” he said.

Luke’s dad, Steve Cohen, said he has been proud to watch his son mature as he follows the news and takes on more leadership positions at school.

“He’s 13, so he doesn’t always think deeply about these issues, but to see him put things in context and become interested has been really gratifying,” he said.

Marlene Cohen, a University of Maryland communications professor and Machar board member, has been working with the three on their projects. They all meet on Sundays to work on their speeches, which means a lot of boring repetition.
“I tell them, ‘This is really old to you, but the audience is only going to hear it once,’” she said.

Back on the playground, Juliet, Rigby and Luke discussed their latest practice session. Rehearsing standing up, they agreed, as if there was a real audience there, really helped their nerves. 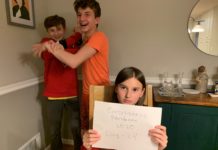 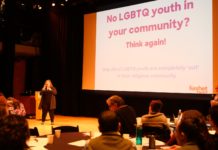