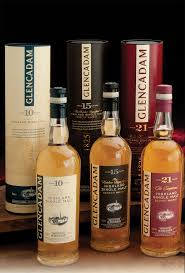 Although all the whiskies were solid, one of the real standouts was the Glencadam whiskies, ably represented by Daniel Tindal of CIL US Wines & Spirits.

From the Glencadam distillery in Brechin, Angus, in the eastern highlands of Scotland, these whiskies remain fairly unknown in the American market. The distillery was founded in 1825 and, like most Scotch whisky distilleries, has changed ownership multiple times over the years. Most of its production has made its way into blended whiskies of one sort or another rather than being released as pure or single malt.

In 2003, Allied Domecq — which had acquired Glencadam in the 1980s — thankfully sold it to Angus Dundee Plc.  This meant that malt whisky drinkers were finally given the opportunity to drink Glencadam’s lovely whiskies.

Angus Dundee Plc. is a respected player in the market. It also owns Tomintoul in Speyside, Scotland, produces reputable blends and has developed a niche in bulk whisky. It has released three Glencadam single malts to the U.S. market under the guidance of industry veteran Lorne Mackillop.

Although Glencadam’s has been in the United States for a little while already, it has only recently wound up with more capable representation. It’s really good hooch.

Glencadam, aged 10 years, Highland Single Malt Scotch Whisky (46 percent abv; $55): This is light, fresh and floral with some enjoyable citrus, straw, cereal, vanilla and grassy aromas. All of which follows easily through on the somewhat zippy palate, with a little additional custard, honey and nut elements and all with a lovely, creamy texture, and gentle, long, sweet finish. It’s young and a touch rustic, without being feisty; a lovely introduction.

Glencadam, aged 15 years, Highland Single Malt Scotch Whisky (46 percent abv; $85): The five additional years of maturation have, as one expects, calmed it down a tad, and allowed other elements to develop and shine through. While distinctly related to its younger brother, an enjoyable slightly briny element has developed, along with some caramel and possibly fudge notes. The palate is where this older expression really struts its stuff: malt, toffee, honey, vanilla, dried fruit (apples and perhaps apricots spring to mind), a touch of spice and related wood notes — all in wonderful balance. This is refined and traditional, the way good whisky so often is when stripped of the often enjoyable but sometimes entirely unnecessary lipstick of special finishes. One to savor and enjoy.