The Academy Awards are always a Jew-y event. But during Sunday night’s telecast, many segments could be counted as overtly Jew-y. Check out five Jewish highlights from the ceremony.

1. The most meaningful moment was when The Lady in Number 6: Music Saved My Life won best documentary short. The subject, pianist and oldest known Holocaust survivor Alice Herz-Sommer, passed away just last week at age 110. Upon accepting the award, director Malcolm Clarke recommended we all watch the film. Herz-Sommer, he said, will “help you live a happier life.”

2. Another tearjerker was the “In Memoriam” segment, commemorating those we lost this year, including Harold Ramis, Sid Caesar, Shirley Temple, James Gandolfini and Philip Seymour Hoffman. Jewish diva Bette Midler followed with a performance of “Wind Beneath My Wings.”

3. Frozen star Idina Menzel hit the stage for a soulful, but unnaturally fast rendition of hit song “Let it Go.” But the moment before that had everyone talking, when presenter John Travolta mistakenly introduced Menzel as “Adela Dazeem.” (Or maybe it was Adele Dazim? Who knows). Naturally, the flub immediately sparked an Adela Dazeem Twitter account, which hilariously tweeted “THANK YOU, JORN TROMOLTO!” Dazeem now has around 19,000 followers.

4. Mazel tov to Spike Jonze (aka Adam Spiegel) on winning best original screenplay for Her, the sci-fi romance starring Joaquin Phoenix and the voice of newly pregnant Scarlett Johansson.

5. Last, but certainly not least, was Cate Blanchett winning best actress for Woody Allen’s Blue Jasmine. Unlike her Golden Globes acceptance, where she spent much of the speech praising Allen, she gave him a brief mention this time, which garnered an awkwardly light applause. 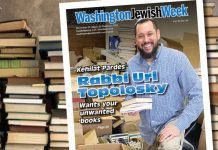