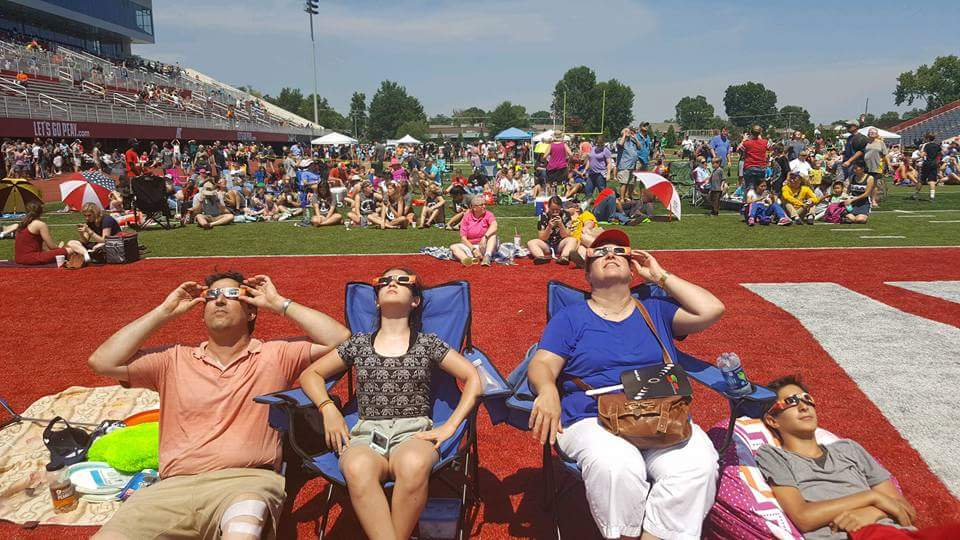 After a tiresome 13-hour drive, my family and I arrived at our hotel in Kentucky – we were now officially eclipse-chasers!

Exhausted, we immediately went to sleep, but I had difficulty sleeping because I couldn’t stop thinking of the exciting event that brought us here – the Total Solar Eclipse of 2017. I had never seen an eclipse before, let alone a total one, so the mystery kept me up all night. At 6:30 AM, I was the first in my family to wake up, get dressed, and check the weather at Austin Peay State University in Clarksville, Tennessee- the viewing location I had chosen after extensive research. A cloudy sky would ruin the whole eclipse, but luckily Google projected that Clarksville is going to enjoy a crystal clear sky.

Following a quick breakfast, we headed to Austin Peay University filled with a mixture of suspense and excitement. When we arrived at Austin Peay’s football stadium, the excitement was palpable. Telescopes were set up at midfield, astronomical explanations were displayed on the jumbotron, and an announcer invited hundreds of people into the stadium and called out the hours and minutes until C1 – the first phase of the eclipse when the moon starts to pass in front of the sun, covering it partially.

We put on our NASA-certified glasses and watched in awe as parts of the sun slowly became blacked out by the moon. But this phase was only a build-up to totality, the state in which the moon fully covers the sun.

At 1:28 pm, when the final bits of sun got eclipsed by the moon, we all took off our viewing glasses, and the stadium erupted with cheers and hollers of amazement. I couldn’t believe my eyes – it became dark all around us, and afternoon turned into night!

It was one of the most beautiful sights I had ever seen. It was peculiar, but at the same time a breathtaking moment. I saw a large black circle surrounded by a white fiery lining. Totality- which lasted for two minutes- was totally worth the 13-hour schlep. The eclipse was a sight I will remember for the rest of my life.

The eclipse is not just an amazing astronomical phenomenon, but it also teaches an important lesson. Just as the bright sun was eclipsed by the moon and it became night in the middle of the day, so too we may sometimes be eclipsed by troubles, drowning in difficulty. However, just as the moon passed on and the sun returned to shine radiantly, let us remember that negativity and dark moments are only temporary, and the light, love, and beauty of our lives will be revealed once again. We need to put on our protective lenses of positivity and optimism, which will help us overcome all our challenges.