When Russia’s barbaric aggression against Ukraine began, Jewish aid organizations estimated that 200,000 Ukrainian Jews were integrated into the life of that country, making the Jewish community there the third-largest in Europe and the fifth-largest in the world.

Since March, Jews have fled in droves, mostly to Israel. Feeling helpless, my husband and I sent money through the Jewish Federation. At Passover, we placed a beetroot on our seder plate in solidarity with the people of Ukraine.

Borscht, the gorgeous garnet-colored soup, gets its radiant hue from beets. Popular throughout Eastern Europe, borscht was not only invented in Ukraine but is its most famous food. However, original recipes were made from a bitter white root called borsh. Poverty prompted this unpleasant soup to become widespread.

But during the Renaissance, people began preparing this recipe from much sweeter beets, retaining the original name. Eventually, Ukrainians of means added beef, beans and vegetables to the recipe.

Many celebrated Jewish foods have their roots in Ukraine. Babka, the cake baked in loaf pans in America, is baked in high round pans in Ukraine. In both Ukrainian and Yiddish, baba means grandmother; babka means little grandmother. Some say this tall cake resembles grandma’s long skirt.

Many Ukrainian Jewish recipes are well known to Ashkenazi Jews, particularly challah and stuffed cabbage. Made with nutty-flavored buckwheat, kasha varnishkes evolved into bowtie pasta flavored with caramelized onions. Often prepared with butter and served with smetana, potato latkes are beloved in Ukraine. Jews created an oil-based version to eat with meat. This popular dish is served at Chanukah and throughout the year.

But there are some Ukrainian Jewish foods unfamiliar to most Americans. Carrot and zucchini muffins are popular at Passover but are eaten all year, kotlety are meat patties stuffed with mushrooms and syrniki, cheese pancakes, are a treasured treat.

Since the crisis in Ukraine began, I have cooked these dishes as a tribute to Ukrainian Jews forced from their homeland by a cruel tyrant — a theme that has replayed throughout Jewish history. While it is unclear if Jews have a future in Ukraine, I’m trying to keep the memory of Jewish life there alive through food.

When you chop beets, your hands turn red. I, therefore, rely on bottled borscht, enhancing it so even a Ukrainian grandmother would think it’s homemade. The only way she’d suspect the truth is that my hands are not stained.

Three days before serving, place all the ingredients in a large stockpot. Simmer covered, stirring occasionally, for one hour, or until the meat and potatoes soften. Check the seasonings. If it’s too sweet, add a bit more vinegar. If it’s too tart, add a little sugar.
Refrigerate and skim the fat from the top. Remove the bay leaves, bones and peppercorns. Serve hot. 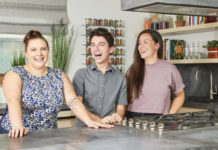 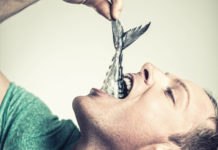 Is there herring in the Red Sea? My Passover tradition