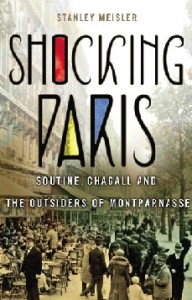 This book purports to examine a group of artists that flourished between the two world wars known as the “School of Paris.” As the author states in his introduction, “most came from the Russian Empire, almost all were Jewish, and they made an impact on the history of art before most Parisians realized they were there.” However, they were not a school or a movement in the usual sense that they followed a common vision or shared a worldview. They were simply, he says, “a phenomenon of history.”

The three best-known members of this “School of Paris” were Amedeo Modigliani (1884-1920), Marc Chagall (1887-1985), both of whom remain tremendously popular, and Chaim Soutine (1893-1943) who is also highly esteemed but less well-known to the public. Other lesser-lights include Michel Kikoine, Jacques Lipchitz, Moise Kisling and Jules Pascin. In any case, three quarters of this book centers around Soutine, with some cursory chapters on Chagall and Modigliani that break no new ground.

Soutine was the 10th of 11 children born to poor parents in a nondescript shtetl not far from Minsk. He evidently endured a brutal childhood but managed somehow to go to art school in Minsk and arrived penniless in Paris in 1913. Soutine was ugly, lacking in social graces and his personal hygiene left much to be desired. He slapped great gobs of paint on his canvases (anticipating according to the author the abstract expressionists) and produced works that created a “world in utter turmoil, in frightening rebellion,” capturing the chaos beneath an ordered surface. He was fascinated by blood and decay and painted a notorious series of still lifes of rotting carcasses. He lived on the edge of starvation until he was discovered by the American collector, Dr. Albert Coombs Barnes, who showed up at his studio in 1920 and snapped up 52 canvases for $3,000. The Barnes Foundation Museum in Philadelphia is still one of the best places to see his work. Its website (www.barnesfoundation.org) shows 20 of Soutine’s canvases.

Soutine never had to worry about money again and had a series of other dealers and champions who made sure his life was comfortable and secure – until the Nazis arrived in Paris in 1940. Even before that, French anti-Semites were mounting attacks on the foreign artists in Paris whom they charged were overrunning and polluting “true French art.” The author adds a useful chapter that reminds us how deeply and viciously anti-Semitic France in the 1930s really was.

As the Nazis approached, Jewish artists sought to escape. Chagall and his wife thought they were safe in Vichy-ruled Marseilles — but he was rounded up with several hundred Jewish men in April 1941. According to a witness, he sat apart from the others and when a senior Vichy officer arrived, said, “I beg of you, don’t lump me with all those people … I am a world-famous painter.” The U.S. consul in Marseilles helped secure Chagall’s release and then got him to America.

By the time the Germans arrived, Soutine was in very poor health. He was hidden by supporters and lovers in and outside of Paris and eventually landed in a village in the Loire. His final lover, Marie-Berthe Aurenche, did not take very good care of him and he died of a perforated ulcer in 1943 after an emergency operation that came too late. Aurenche then had him buried in Montparnasse cemetery with a carved cross on his gravestone.

The author notes that at least 20 members of the School of Paris died in Auschwitz and other Nazi death camps. Inexplicably, he does not bother to list their names and then adds, “the actual number was probably much higher.”

This book is useful as an introduction to Soutine for those unfamiliar with his life and work but it has drawbacks, the chief of which is that it really does not deliver what the title promises. There is no serious examination of most of the artists associated with the “School of Paris.” Some have a couple of paragraphs devoted to them. Others are mentioned only in passing. The book establishes that the one common thread that links most of them was their Jewish origin but fails to examine how this may have influenced their art or the way they approached the world.

This is a work of popular history written by an amateur historian. He does not provide a penetrating reassessment of Chagall, whose stock among art historians fell after his death though he remains beloved by the public. The author also remains somewhat undecided about Soutine’s true stature. “The French treat Soutine as eccentric and special, an artist in need of great care and understanding. I have the feeling they are trying to push him toward the pantheon of great French painters,” he writes. “They are not exactly sure where he belongs there, but they are right to push.”