Ann Lewis
Director of communications for HILLPAC and Friends of Hillary

I’ve almost finished Letters to Auntie Fori, by Sir Martin Gilbert, written to an Indian friend, Mme. B.K. Nehru, who at the age of 90 tells him she was actually born a Hungarian Jew. Now she wants to learn about Jewish history, and so he promises to write every week. The book includes 140 letters about history, customs and childhood memories.

Next will be Open Up the Iron Door by Rabbi Avi Weiss. The movement to free Soviet Jewry is one of the most inspiring examples of activism in our time.  I look forward to Rabbi Weiss’ personal account.

I’m always looking for women’s history. This summer, I’m going to reread Lift Up Thy Voice by Mark Perry, about South Carolina’s Grimke family: two white sisters who were passionate advocates against slavery and for women’s rights — and their black nephews, who became founders of the NAACP. It’s a remarkable American story that should be better known.

Everything You Ever Wanted, a memoir by Jillian Lauren, is at the top of my pile every night. Jillian and I traveled to Ethiopia at the same time to adopt our children, and her writing is just so easy and fun to read. Her story about raising a child with special needs is a must-read for every parent who doesn’t think having kids is a bowl of cherries (that should be all of you, right?).

I’m reading to my son James and the Giant Peach. The fantasy worlds of Roald Dahl are so enjoyable to pass on to the next generation. We are going to read Dahl’s The BFG next. And lastly, since I am still new to the learning and literature of Secular Humanistic Judaism, I am reading Staying Sane in a Crazy World, by the movement’s founder, Rabbi Sherwin Wine. 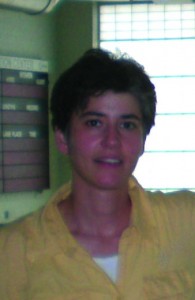 OK, I confess to being a total book nerd and irritating everyone on my swim team with my unsolicited book advice when I really should be working on my flip turns. Here are two recent favorites.

Half a Life, by Darin Strauss. The author, at 32, realizes he has spent half of his life stuck in the moment when he accidentally struck and killed a high school classmate with his car. This book is the most profound look at grief and guilt that I have ever read. I finished it and immediately started reading it again.

I could not put down James Nestor’s Deep. This is a fascinating and terrifying look at open-water free diving, where participants see how far down they can dive on one breath of air. Going down really isn’t the problem – it’s getting back up again.  Lots of facts and myths about life beneath the surface examined here. 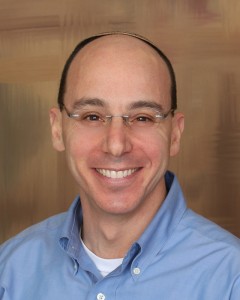 I am rereading Abraham Joshua Heschel’s The Sabbath. I turn to Heschel because he describes the Jewish theology of time better than any text since the Talmud, or maybe even since Genesis. The book skillfully delineates the difference between the necessary things of space that consume so much of our lives and the more difficult realm of time that we find so difficult to access and sustain. In our (post)modern context, where electronic devices erase all boundaries between public/private, home/work, weekend/weekday and friend/stranger, revisiting The Sabbath seems like a good thing to do. 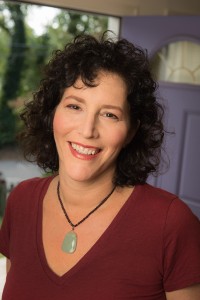 On my nightstand sit books I’ve selected by perusing reviews, visiting bookstores or noting what people are reading at the pool or on the train. Others materialize and typically offer a new thought on a problem I’m grappling with in my writing or life. The following books have recently found me:

Of Mice and Men by John Steinbeck. My daughter was assigned this classic for her summer reading, and I’m joining a friend in revisiting Steinbeck with our rising high school freshmen.

Florence Gordon by Brian Morton. A former professor emailed to suggest this novel about a quirky feminist writer, who while seeking solitude to pen her memoir, finds herself at the epicenter of her family’s emotional earthquake.

Father of the Rain by Lily King. A fellow bibliophile texted me a gorgeous line from this father-daughter tale of a woman’s return to the pivotal moments of her youth.

Summer gives me the opportunity to choose books that take a little more concentration and perseverance. During the past few years I have been fascinated with the development of the human mind and its evolution, and so on my list for this year are Evolution in Four Dimensions by Jablonska and Lamb, Religion in Human Evolution by Robert Bellah, The Organized Mind by Daniel Levitan, and Thinking Fast and Slow by Nobel Prize winner Daniel Kahneman.

Judaically, I hope to read Micah Goodman’s Maimonides and the Book That Changed Judaism, Shlomo Avineri’s Herzl’s Vision and Hillel Halkin’s Jabotinsky. If time allows, I will probably try Michael Oren’s Ally, just see what all the fuss is about.

This should make a small dent in the pile of still-to-be-read books that, no matter how hard I try, always seems to grow. 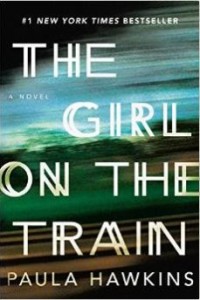 You can never have too many books. I have too many books. So to give myself a fighting chance, I borrow as many books as I can from the library. I especially enjoy putting holds on books from the comfort of home. With a click, a book I want somehow appears at my branch. This is how I got my hands on The Girl on the Train by Paula Hawkins. I first heard about this murder mystery with the unreliable, alcoholic narrator with a knack for self-sabotage one winter night on NPR, so I thought it would only appeal to a select audience. Imagine my surprise to learn that it was a best-seller and when I put a hold on it, I was something like 650th in the queue. As I write this, I’m first in line for Quiet, by Susan Cain, an ode, I’m told, to the “power of introverts.”
— David Holzel, senior writer

This summer, I’ve been less a reader of books than a bailor of them. No sooner did I get my hands on Words Without Music and Ally, new memoirs by the minimalist composer Philip Glass and Israel’s former ambassador to the United States Michael Oren respectively, I surrendered them to book reviewers. (WJW’s review of Words ran on June 9; Ally appears this week). I bought Atol Gawande’s Being Mortal, and gifted the book by the physician-philosopher to my mother for her birthday. But I not only got, I kept, T.C. Boyle’s The Women, about the lives and many loves of Frank Lloyd Wright. Touring Fallingwater last weekend, perhaps America’s most famous house by America’s most famous architect, I was struck by the cold logic of its geometry — the hard, right angles, the parallel, perpendicular and intersecting lines. One would think that a highly ordered, disciplined man had designed it, a Buddhist perhaps. But the more I read about Wright — his arrogance, quickness to anger, foolish optimism (Fallingwater came in five times over budget to the dismay of Wright’s Jewish client, Pittsburgh department store magnate Edgar Kaufmann Sr.) and chaotic domestic life  — the more I realize what an intriguing contradiction he is. “Every great architect is — necessarily — a great poet,” he said with characteristic lack of humility. Wright was a complex man, just the way I like my characters — in fiction, non-fiction, journalism and up close.
—  Geoffrey W. Melada, editor-in-chief 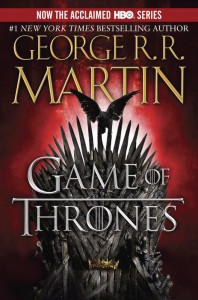 My husband and son are seriously addicted to Game of Thrones. My husband read all five books. My son topped that, reading each of the 1,000-page books twice. They spend hours analyzing the books and television episodes, pointing out the good and evil in each character.

Meanwhile, I stereotyped the entire series as a violent, bloody work that clearly was not for me. For two years, I held to this notion as I found comfort in my own literary choices, although my son was convinced the exposition alone would win me over.

Well, you guessed it. Two months ago, I began the first book and I just finished the third. While I definitely cringed as one character devoured the heart of a stallion and others were beheaded with the single swing of a sword, I eagerly am about to begin the fourth book.

More sudden and excruciatingly violent killings surely await, as does a tale intertwined with all the ingredients of an excellent read.
— Suzanne Pollak, senior writer 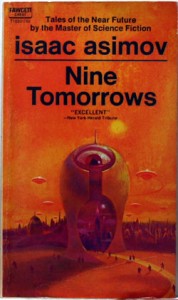 This summer I am revisiting the science-fiction classic Nine Tomorrows, a collection of short stories by Isaac Asimov. Growing up in a home where the bookshelves overflowed with my father’s copies of the magazine Analog Science Fiction and Fact — in whose pages giants of the genre, like Robert A. Heinlein and Anne McCaffrey, debuted stories — it was only natural that Asimov’s succinct, thoughtful tales served as my gateway into the wider world of science fiction. Though by no means breezy, Nine Tomorrows is the perfect book for the beach or plane trip. I can pick it up and put it down for a while without having to retread ground; each story can be read in one sitting — though I find myself marveling at the amount of depth packed into each sentence. The short story Profession, from 1957, is my favorite. I’ve noticed that many of the story’s themes are fashionable yet again in such popular young adult series as Divergent.
— Melissa Apter, politics reporter 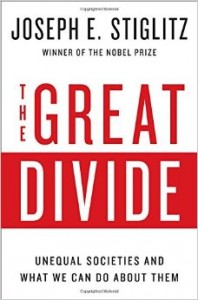 Leading economists like Nobel Prize winner Joseph E. Stiglitz have been sounding the alarm about increasing wealth and income inequality across the world and especially in the United States, which is the most unequal of all advanced nations. In The Great Divide: Unequal Societies and What We Can Do About Them, the follow up to his best-selling The Price of Inequality, Stiglitz strings together a series of essays he wrote for various media outlets during the administrations of George W. Bush and Barack Obama that go into the irresponsible policy decisions that have decimated the poor and middle class in America while the richest 1 percent has done phenomenally well. Stiglitz argues that economic inequality is a choice and that with the right policy solutions in place, destructive austerity measures can be reversed and a more just and fair society can be achieved.
— Josh Marks, general assignment reporter 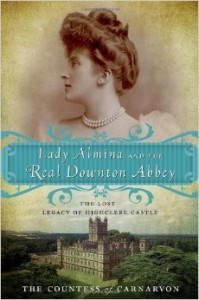 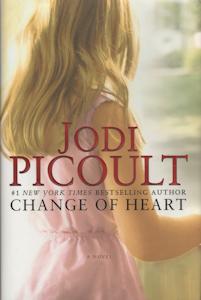 Right now, I’m in the middle of reading Change of Heart by one of my favorite authors, Jodi Picoult. It’s about a death row prisoner who wants redemption through donating his heart to the sister of his victim, who needs a transplant. However, after he appears to perform several miracles at the prison, people start to wonder if he is a messiah. The book includes perspectives from multiple characters, including an inmate, a Jewish lawyer and a priest, which makes for an interesting comparison. I’m also looking forward to reading Amy Poehler’s Yes Please; I loved Mindy Kaling’s Is Everyone Hanging Out Without Me? and Tina Fey’s Bossypants, so I’m hoping Poehler’s autobiography will be equally hilarious.
— Danielle Kiefer, intern