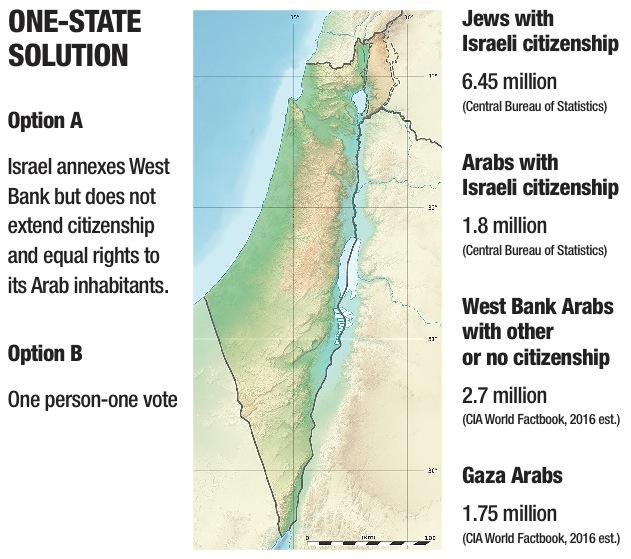 President Donald Trump at his press conference last week with Israeli Prime Minister Benjamin Netanyahu appeared to upend a U.S. policy that has been in place since President George W. Bush announced it in 2002: American support for a two-state solution — Israel and an eventual Palestine side by side.

“So, I’m looking at two-state and one-state, and I like the one that both parties like,” Trump said on Feb. 15. “I can live with either one.”

Two states have been the goal of negotiations between Israel and the Palestinians since the Oslo Accords of the 1990s. It is inherent in the United Nations resolution passed after the Six-Day War in 1967, calling for Israel to withdraw from territories it had just conquered in exchange for Arab recognition of Israel.

And it was the goal of the U.N.’s 1947 partition plan that gave Israel it’s international recognition.
So what is a one-state solution? Who would create it and how? And what would the one-state world look like for Israelis and Palestinians?

This is the one-state solution the Israeli right favors. Naftali Bennett, head of the pro-settler Jewish Home party and a minister in Netanyahu’s government, has repeatedly called for Israel to annex most or all of the West Bank. Doing so would preclude a Palestinian state.

Activists calling for annexation do not call for extending Israeli citizenship to the Palestinians living in the annexed territory. That has led to charges that Israel would become an apartheid state, with a large part of the population having no democratic representation.

Under those circumstances, the Palestinians would have two choices, said Morton Klein, national president of the Zionist Organization of America, whose positions are similar to the settler movement.

Like today, they could “maintain a peaceful economy, where the Arabs of Gaza and the Palestinian Authority run their own lives, except for security.” Or, he said, they could become citizens of Jordan, whose majority is of Palestinian descent.

Still, most Israelis and Palestinians oppose a one-state solution.

A poll by the Tami Steinmetz Center for Peace Research, Tel Aviv University and the Palestinian Center for Policy and Survey Research, with funding from the European Union, found that 36 percent of Palestinians support a one-state solution, while 19 percent of Israeli Jews are in favor. Israeli Arabs, who identify both as Israelis and Palestinians, support the idea by 56 percent.

By contrast, 55 percent of Israelis and 44 percent of Palestinians support the two-state solution, although numbers show both populations are pessimistic that it can be achieved.

“The best [a one-state solution] would look like would be the treatment of Arabs within Israel proper today,” whereby Arabs living in Israel vote, but are largely segregated in their own economically depressed communities, said Daniel Serwer, director of conflict management at the Johns Hopkins School of Advanced International Studies in Washington. “And that treatment is clearly unequal and unfair.”

The one-state solution is not a solution, but a problem, said Ori Nir, spokesperson for Americans for Peace Now, which opposes settlement construction and supports a two-state solution.

“It’s a recipe for perpetual conflict and probably the end of Israel as a Jewish state and a democracy,” he said.

Option 2: One person, one vote

The day that Trump and Netanyahu met, Israeli President Reuven Rivlin, a longtime opponent of the two-state solution, said that if Israel annexes the West Bank, it must give Palestinians living there Israeli citizenship.

“Applying sovereignty to an area gives citizenship to all those living there,” he said. “There is no [separate] law for Israelis and for non-Israelis.”

He dismissed concern from critics that Israel’s Jewish character would disappear with millions of new Palestinian citizens.

But many Israel experts are worried about just that.

“If the status quo persists and the peace process doesn’t resume, the inevitable outcome is a binational state whereby Israel loses its [Jewish] majority,” said Guy Ziv, an assistant professor at American University’s School of International Service. In this binational state, Israel would either retain its Jewish identity as an apartheid state or become a non-Jewish democratic state, Ziv said.

Rivlin’s announcement may signal that Israelis are beginning to assess in concrete terms the long-term ramifications of the country’s Six-Day War conquests of 50 years ago.

Israeli courts are considering the legality of a law passed this month that would have allowed Israel to seize private Palestinian land on which settlements had already been constructed. The legislation marks the first time that an Israeli law, rather than military orders, has applied to Palestinians on the West Bank.

Lawyers for the groups opposing the law say that the Knesset cannot legislate for the Palestinians who live under military occupation and who are not Israeli citizens.

If Israel were to extend its law and citizenship to the Palestinians, the result would be much like a one- person-one-vote state envisioned by many Palestinians.

“Our understanding of one state would be a democracy with equal rights in which I could become president or prime minister of Israel,” Mustafa Barghouti, a prominent Palestinian legislator and activist, told the Christian Science Monitor. “If this state is truly a democracy it cannot be Jewish, it will be a joint state.”

Writing in the Huffington Post last November, Jonathan Kuttab, a Palestinian, and Robert L. Herbst, an American Jew, argued that a two-state solution “no longer fits the facts on the ground.” Instead, they called on Israelis and Palestinians to forge a single state starting by rejecting two prominent mutually incompatible ideologies” — Zionism and Palestinian anti-colonialism.

“For a solution to commend itself to people of goodwill on both sides and to the international community, it must address the major needs of Jews and Palestinians as identified by each side as bottom line irreducible requirements, as opposed to desired or demanded outcomes,” they wrote.

But Israel is unlikely to vote itself out of business voluntarily.

Yoram Peri, professor of Israel Studies at the University of Maryland, said he fears what the Israeli government might do if the country’s Jewish majority was threatened. The Israeli term for it is “transfer.”

“There’s only one thing I believe will happen — which I hope it will not — to push some of the Palestinians out of the territory.”

This couldn’t be done at a time of calm, he said. “But assuming there will [be violence following an annexation], you push 200,000, 300,000 people out of territories and you solve the problem.”

Peri said that if Israel did not force the Palestinians out of a binational state during a time of violence, the government would likely impose so many limitations on them that they would willingly leave the country.

But given the century-long clash between Arab and Jewish nationalism, “it would be delusional to assume that they can live together peacefully,” Ziv said. “They would not even be able to agree on the nature of the institutions and laws that would govern this new state. And tensions would likely devolve into violence along religious-ethnic lines, as we’ve seen in Bosnia and Kosovo.”