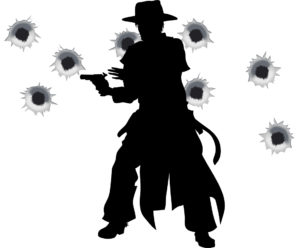 It’s time again to check my email bag for your wine and spirits questions. You can always reach me at [email protected].

Can a wound be cleaned by any type of alcohol?

No. Despite the impression one might get from films or television, self-treating any sort of open wound with regular drinking alcohol is not a terribly good idea. In a pinch, one can disinfect a paper-cut or small scrape with isopropanol or pure ethanol, but anything for which a simple band-aid isn’t sufficient treatment is probably better handled with a first-aid kit, rather than a bottle of rye. The “cleaner” or more “pure” the alcohol, the more useful are its sanitizing properties. Pouring a cocktail over an open wound, however, is a terrible idea.

Ditto for the oft-seen movie moment where the hero who has been shot proceeds to takes swig of whisky, pours a splash over the gunshot wound, and then extracts the bullet. For all sorts of hopefully obvious reasons, this is not a good idea. If you find yourself shot, seek medical attention immediately, and save the booze for much, much later — ideally for when you can safely celebrate the fact of a full and speedy recovery.

Does alcohol have a shelf-life or sell-by date? Is it the same for wine as for liquor?

Strictly speaking, no — alcohol in its pure form does not technically go “off” or “expire.” All that other stuff in your booze, however, is subject to decline or evaporation.

Regular table wine, for example, is usually around 5 percent alcohol by volume (abv) at the low end to around 16 percent abv at the high end, so there are plenty of other elements in the bottle that will deteriorate over time and especially with exposure to air. Most wines are meant for consumption within one to three years of the vintage from which it was produced. Some wines are produced to last longer, and some are produced to actively improve with age.

Once opened, however, even the best wine is on a rapidly diminishing timetable. A “fortified wine”, like port or sherry, can sometimes last up to a month once opened. Most table wines will last only a few days, though. Some will only last a few hours.
Once it starts to go bad, the wine may start to taste like vinegar — the acetic acid bacteria consume the alcohol and metabolizes it into acetic acid and acetaldehyde, creating a vinegary smell.

Exposure to the air can also lead the alcohol in the wine to oxidize, reducing the freshness or fruitiness, and eventually causing an almost nutty, bruised-fruit sort of taste. Wine that has turned bad becomes unpalatable, though not — strictly speaking — unpotable.

Unlike wine (or beer) which are made with organic materials, spirits or base liquors — such as whiskey, vodka, brandy rum, and tequila — have been distilled, and no longer contain any organic material. So, they won’t change in a sealed bottle, and enjoy an indefinite shelf-life.

Once exposed to air, they may eventually start to lose certain flavor characteristics or qualities, but it generally takes years. Once the alcoholic product in question contains sugars or other elements, such a liqueur, it can get a bit trickier — especially when exposed to air. A little common sense goes a long way. If the bottle starts to form a sticky or gooey crust round the opening or cap, you should start to use somediscerning judgement.

Is there any truth to the expression “liquor before beer, you’re in the clear; beer before liquor, never sicker”?

No, not really. Hangovers have more to do with the amount of alcohol consumed and the relative metabolism of the individual doing the consuming, than anything to do with the form of the alcohol. From the vantage point of the potential negative effects of alcoholic consumption, alcohol is alcohol regardless of its form.