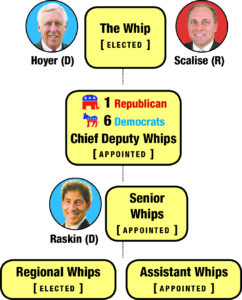 The congressional whip organizations in the House of Representatives, led by Democratic Rep. Steny Hoyer of Maryland and Republican Rep. Steve Scalise of Louisiana, play a key role in the world of partisan politics: Their goal is to ensure party unity when it is time for Congress members to vote. But which representatives are also whips is less clear.

Why the secrecy? “Because some members want to wear their partisan activity on their sleeve, but others want to help out the party” more discreetly, said Scott Meinke, author of “Leadership Organizations in the House of Representatives: Party Participation and Partisan Politics,” and a political science professor at Bucknell University in Lewisburg, Pa.

Rep. Jamie Raskin (D-Md.) was appointed by Hoyer to be a senior whip for the Democratic Caucus in the 115th Congress earlier this month. The appointment is unusual because Raskin is a House freshman.

The whip organizations’ function “is to assure party leaders that they have the troops in line when it comes to votes,” said Ben Ginsberg, a political science professor at Johns Hopkins University.

Asked about his responsibilities as a senior whip, Raskin said he meets with other whips to discuss upcoming legislation, disseminates the party’s message to House members and then works to persuade them to vote along party lines.

Most recently, “we were focused on the upcoming assault on healthcare and continued to articulate defense of the Affordable Care Act, Medicare and Medicaid,” he said in a phone interview.

Raskin’s appointment follows his four years as the majority whip in the Maryland Senate.

“I was in a position in Maryland to help push a lot of legislation through,” Raskin said. “In the House, my experience so far is that we’re playing a lot of defense.”

He named examples such as attempts by House Republicans to weaken the Office of Congressional Ethics and to permit the sergeant at arms to punish representatives for breaches of decorum.

A 2002 Congressional Research Service report said Democrats have six chief deputy whips and Republicans have one. Altogether, 60 members make up the Republican organization and 100 for the Democratic.
The actual number of whips may have changed since then because both parties stopped releasing full lists of their whips in the early 2000s, according to Meinke.

This leaves the decision to identify as a whip down to individual representatives.

“We intend to continue keeping the list of [certain whips] to ourselves because the whip organization is an internal conference operation and it serves the conference best as such,” said a spokeswoman for former Majority Whip Roy Blunt (R-Mo.), Roll Call reported in 2002.

Similar to its membership, the exact responsibilities of each type of whip remains vague.

The leaders of each organization, Hoyer and Scalise, who are elected, are referred to as the minority and the majority whip, respectively.

Asked if the whip organizations should be more transparent about their rank and file, Meinke said that is the organizations’ prerogative.

“For some whip members in competitive seats, partisan participation might be a liability in the eyes of constituents,” he said. “With that said, I do think that the policy keeps the public from some useful knowledge about how Congress and its members operate, and it certainly makes good research on this important part of Congress more difficult.”

Why are they called whips?

The name “whip” comes from the British term “whipper in,” according to the Democratic Whip’s website. The “whipper in” was responsible for keeping the foxhounds from leaving the pack.
The term was initially adopted by Thomas Reed (R-Me.) in the early 1900s, but became more extensively used by Democrats in the 1930s.