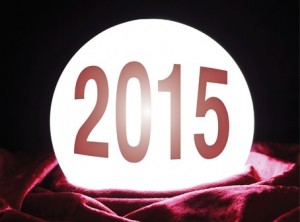 The agony over the disappearance and murder of Israeli teens Naftali Frankel, Gilad Shaar and Eyal Yifrach, and the viral #BringBackOurBoys campaign had yet to happen. And in Cuba, imprisoned USAID worker Alan Gross was losing hope of being freed. By the end of the year, he was home in Washington.

These events could not have been predicted at this time last year. So what’s going to happen in 2015 that we don’t know about now? To help answer that question, we asked a variety of leaders in our community to gaze into their crystal balls and tell us what issues, trends and causes will unfold this year. Here is what they saw.

Combine Cantor’s departure with consistent anti-Israel rhetoric from the Ivy League towers that feed White House ranks and you wind up with a backlash that won Republicans 33 percent of
the Jewish vote last fall, including a victory for Lee Zeldin, now representing New York’s 1st District.

Momentum (read: money) will only grow ahead of the presidential election
in 2016.
– Lisette Garcia, founder of FOIA
Resource Center

First world problems
In 2015, world Jewry may finally wake up to an astonishing fact: Jews are no longer a “world religion” spread “from one end of the world even unto the other.” Instead, over the last 60 years, Jews have become a religion and people of the first world. Some 93 percent of all the world’s Jews live in countries like the United States, Canada and Israel that boast advanced economies, great political influence, high standards of living and innovative technology. The consolidation of world Jewry requires us to reimagine Jews, Judaism and our relationship to the larger world.  Being a first-world religion, we will discover, is both an asset and a liability.
– Jonathan D. Sarna, the Joseph H. and Belle R. Braun professor of American Jewish history at Brandeis University and president of the Association for Jewish Studies

Death and dignity
The next Jewish thing is going to be about the last thing we do as Jews: dying. As boomers enter their 70s and confront mortality, we’re likely to see major reconsiderations of and innovations in how they die, how they mark that event through ritual and how they seek to mold their legacy through philanthropy and other values-imbued instruments.

Expect more legislation and rabbinic discussion about providing for death with dignity; new rituals and the integration of technology at funerals; a consideration of the most environmentally friendly burial or cremation practices (and perhaps a reconsideration of the halachic aversion to cremation); more business for lawyers specializing in estate planning and the increasing popularity of ethical will videos. Boomers have had a major impact on every other phase of life they’ve gone through, so expect them to make one last contribution before exiting the stage.
– Joshua Ford, writer, public programmer and arts administrator

The mixed-marriage debate
Within the Conservative movement, there will be more discussion and debate about the role of mixed-religion families in our communities and how best to meet their needs while encouraging the raising of Jewish children.

More trial balloons will be launched about allowing Conservative rabbis to officiate at mixed marriages and acceptance of patrilineal descent. As with previous debates about women rabbis and the role of gays and lesbians, dire predictions will be made about traditionalists leaving the movement, on the one hand, or losing congregants to Reform Judaism, on the other. The debate won’t be resolved in the coming year.
– Rabbi Charles L. Arian, of Kehilat Shalom in Gaithersburg

Know your neighbor
In 2015 we will see a rise in relationships building between Jews and Muslims. With so much aggression and fear around the world, the best way to combat it is to meet each other face to face. Particularly as more terrorism advances over the globe, we will want to see in our neighbors allies and friends. If our only interaction with each other is through the news, then we will fail to humanize the other, and add fodder to the existing fire of terror. Though some organizations promoting these ideals do exist, they have not been successful in garnering much support. It will have to be a grassroots effort, community by community.
– Rabbi Elyssa Auster, director of Jewish life at the Jewish Community Center of Greater Washington

Giving circles
In 2015 and beyond, Jewish giving will experience a renaissance through the rise of giving circles. Giving circles are a brilliant way for donors at any level to pool their resources and decide together where to allocate them. They make giving meaningful and collaborative – keys to engaging new donors. Giving circles are on the rise in many identity-based communities, and in 2014, we saw the launch of Amplifier, the first network of giving circles motivated by Jewish values. Amplifier has already generated more people engaged in Jewish giving, Jewish values and building Jewish community. I’m confident this trend will grow exponentially.
– Sandy Cardin, president, Charles and Lynn Schusterman Family Foundation

Now in color
For 50 years the defining image of tikkun olam has been in black and white – of Rabbi Abraham Joshua Heschel marching alongside Dr. Martin Luther King Jr. for the civil rights and human dignity of black Americans. The #BlackLivesMatter movement, and its remarkable resonance in the Jewish community, means that 2015 will finally be the year that we update that iconic memory. There will be new images of Jews fighting for racial justice – as a majority-white
community working together with our neighbors and with growing leadership by Jews of color.
– Jacob Feinspan, executive director, Jews United for Justice

Taking on trafficking
The universe of sexual assault is going to get bigger. The definition will be
expanded. The Jewish community will be united to end domestic violence and then sexual assault, and in 2015 we’ll see a greater awareness of, and advocacy around, trafficking.

Already, our organizations are taking leadership, with NCJW and T’ruah convening the Jewish Coalition Against Trafficking, and JCPA adopting the Resolution on Combatting Human Trafficking in the United States. We credit Susie Stern, who formerly chaired President Obama’s Advisory Council on Faith-Based and Neighborhood Partnerships, for bringing awareness of this issue not only to faith communities but especially to the Jewish community.

After a truly eye-opening 2014, we will see ending violence against women and girls – domestic violence, sexual assault on college campuses, gun violence, stalking or human trafficking – in the U.S. and globally, occupy a high priority in the human-needs agenda of the Jewish community. n
– Lori Weinstein, CEO, Jewish Women International