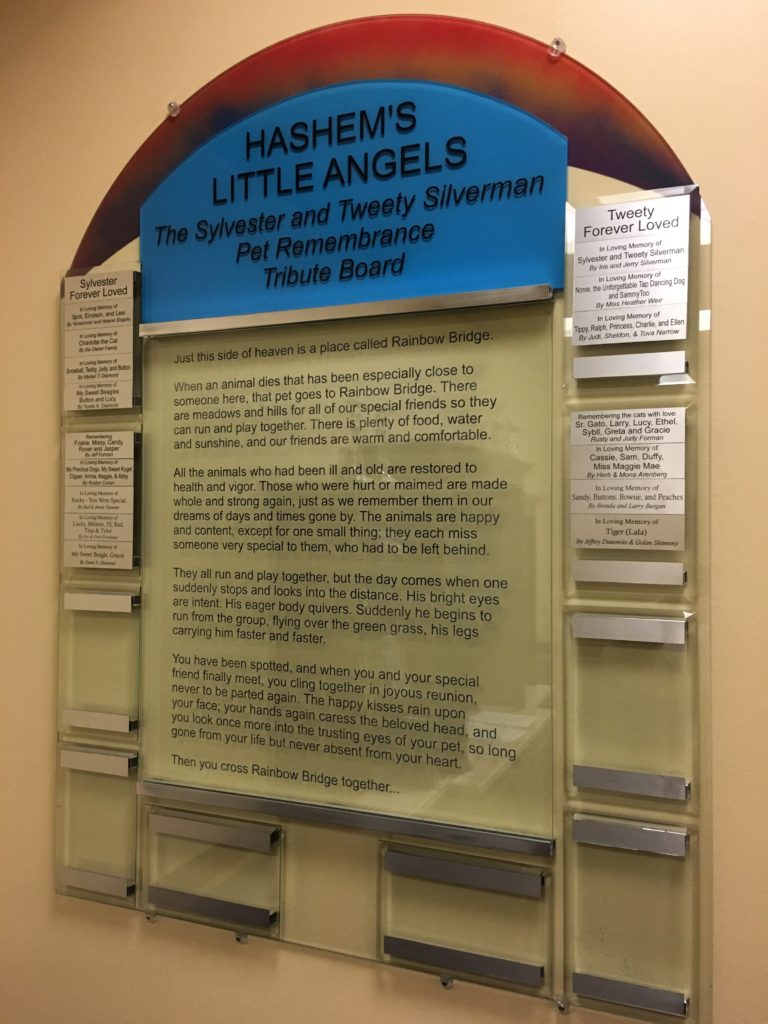 PITTSBURGH — Death and dying is the hallmark of Sharon Ryave Brody’s business. As vice president and supervisor of Ralph Schugar Chapel, Pittsburgh’s Jewish funeral home, Brody has counseled scores of grieving families in times of great distress. However, among the countless circumstances that she has encountered, a recent query was surprising: What do Jewish owners do with their deceased pets?

“No one has ever approached me about that before,” Brody said.

People can bury the pet somewhere legally, have it cremated and the ashes returned or opt for group cremation. In the latter scenario, deceased animals are jointly incinerated with the resultant ashes, then disposed of.

But according to several Jewish pet owners, there is no choice.

Burial can provide solace, explained Adam Levine, supervisor of Friends of Noah, a pet cemetery in Frazer, Pa.
“Some families get really heartbroken and rightfully so,” said Mike Howard, an employee of Restland Memorial Park, a Monroeville cemetery that has welcomed deceased cats, dogs and even horses. “Some people who come in, that’s all they’ve ever had.”

“Some people connect with their pets more than their family members,” Levine said.

At Friends of Noah, granite memorials denoting the names of Lily (a cat), Pepper (a dog) and nearly 30 other departed animals rest just earshot from an adjacent graveyard. Separated by a road and tree line is Haym Salomon Memorial Park, a Jewish cemetery.

Both burial sites are owned and operated by Levine. The proximity to each other can be comforting, he said.

“When I go to the cemetery, I see my parents’ graves and I see Kugie’s grave,” said Steven Roemer.

But also of benefit to the Eastern Pennsylvanian resident is just that the space exists.

“I’m happy that people have a place to put their pets. I know what happens to most dogs, they get cremated,” he said.

“People suffer tremendous loss when they lose a pet,” said Rabbi Yerachmiel Shapiro, spiritual leader of Moses Montefiore Anshe Emunah Hebrew Congregation in Pikesville. However, “Judaism forces us to move from the ‘why’ and ‘why me’ to the feeling of ‘what can I do now.’”

Several years ago, Shapiro aided a congregant on a journey back from grief.

The middle-aged congregant had lost two cats and approached Shapiro about erecting a memorial board for pets — within most synagogues, metal plaques, often with affixed bulbs, record loved ones’ names and dates of death.

Shapiro welcomed the idea, but wanted to ensure that the pet panel was clearly and identifiably different than the structures bearing human names. So along with the absence of lights or metal, plastic and glass were used. Also, straying from the somber and traditional tone of most yahrzeit boards, a rainbow adorning the top, with the words “Hashem’s Little Angels,” was prominently displayed.

“We can do something that can make us more involved in life,” such as becoming active in our communities, volunteering at a

Humane Society or even adopting a baby pet, he suggested.

And for those seeking to comfort a saddened friend, the Babylonian Talmud prescribes a saying for such circumstance, said Rabbi Shimon Silver, of Young Israel of Greater Pittsburgh.

“May the Omnipresent fill your loss.”

“Many people in our society hold their pets in high regard,” said Levine. And when the time comes for an animal’s demise, it is to be taken seriously. “In Judaism, it is a loss.”

As opposed to praying, sitting shiva or saying Kaddish, Symons encourages congregants to “tell stories and get photos.”
She also distributes a copy of “Remembering My Pet: A Kid’s Own Spiritual Remembering Workbook for When a Pet Dies,” by Nechama Liss-Levinson and the Rev. Molly Phinney Baskette.

The important thing is that people “do something and move from pure pain to ‘what can I do now,” said Shapiro. n

Adam Reinherz is staff writer for the Jewish Chronicle in Pittsburgh.