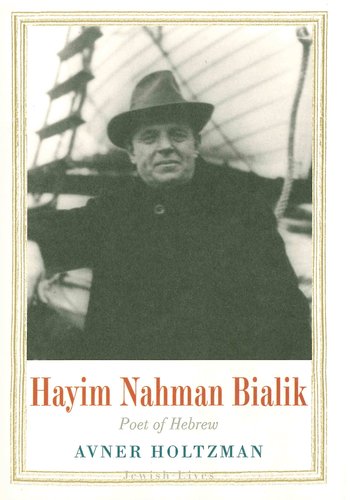 As a youngster, Hayim Nahman Bialik was a yeshiva bocher, a full-time student at a Jewish seminary. Ironically, that man, who would earn the title the “Hebrew national poet,” was one of the spiritual founders of secularism, a movement whose disciples were the pioneers who drained the swamps in pre-state Palestine, farmed the land and founded Israel.

Author Avner Holtzman, professor of Hebrew literature at Tel Aviv University, notes in this well-researched memoir that Bialik believed that “Jewish tradition [needed] to be subjected to vigorous processes of secularization … in order to transform its religious nature into a cultural one.”

But before he came to that conclusion, and because of his background, he found himself in an intellectual Jewish no-man’s-land. “It was clear to him that his Jewish identity was a fundamental element of who he was,” Holtzman writes. “Yet what is the nature and substance of such a Jewish identity if it is emptied of religious faith? … Is it possible to lead a meaningful Jewish life in a world that shunned God’s existence? And what could this young Jew retain from the rich heritage of his forefathers?”

Those questions bothered the teenage Bialik. “It took a long time for the uncertainties to crystallize in his mind,” Holtzman writes, “and prove to be a precious source of artistic motivation and inspiration.”

As a poet, Bialik has inspired schoolchildren and their parents in the Land of Israel and elsewhere in the Jewish world for more than 100 years. And his poetry helped to ignite the passion for the Hebrew language, whose resurrection played such a pivotal role in the rebirth of the Jewish state.

But he was so much more than a poet. Bialik also was a publisher whose presses specialized in translating European classics into Hebrew, promoting the prose and poetry of new Hebrew-language authors and reissuing the almost forgotten works of the medieval Spanish-Jewish poets Shlomo Ibn Gabriol, Moshe Ibn Ezra and Yehuda Halevi.

In addition, he counseled and encouraged many new authors and poets and answered many requests from ordinary people for advice. As artist Marc Chagall observed when he visited Tel Aviv in 1931, “Bialik is not only a poet but also the city’s spiritual mentor.”

But most extraordinary was this poet’s role as a living icon — so fitting for the Jewish people who historically have venerated prophets, rabbis and scholars. Large, enthusiastic crowds greeted his poetry recitals in Jewish communities around the world.

When he finally made aliyah in 1924 and arrived in Tel Aviv, he was “led from one reception to another,” notes Holtzman. The main ceremony was held in the courtyard of the Hebrew high school Gymnasia Herzliyah, in the presence of all the city’s schoolchildren.

These kids were used to visitors, for so many people came to observe a school run in a language dead for 2,000 years. However, Bialik was a special guest.

“The arrival of Bialik … whose poems they could recite at will, stirred them more than usual,” writes the author. “At the request of the young children, Bialik agreed to stand on a chair so that everyone could see him.”

Following his death in Austria in 1934 — he had gone there for an operation — it took 12 days for his coffin to arrive for interment in Tel Aviv, the author notes, as the body’s journey was delayed first by ceremonies in Vienna and then in the Italian port of Trieste. The casket later was driven through Tel Aviv streets before being interred before 100,000 mourners.

But, as I noted earlier, Bialik began his life as an ordinary Orthodox Eastern European Jew. “As a child, Bialik was completely at peace with the religious faith he inherited from his family,” the author writes.

Eventually, he became exposed to books of science and literature of the Jewish Enlightenment. Unlike others, Bialik’s transition from religious to secular life was gradual. At 15, he continued to follow religious ritual, “yet the gnawing questions in his mind intensified until he realized that in his slow retreat from religion he had inadvertently reached the point of no return.”

The poet recalled later that he devised a test to see if God was watching. He waited until all the students at his yeshiva had left and then began reading the Talmud without a hat on his head. When no bolts of lightning struck him, he became a heretic.

The professor lost me occasionally during his academic analyses of Bialik’s poetry. But the book focuses primarily on the life and times of this literary giant, and there the author acquits himself well.

Bialik was not a happy person. His frequent and long periods of depression apparently stifled his creativity, and he wrote few poems during the last 20 years of his life.

Nonetheless, as Holtzman notes, the “intensity and longevity of the Bialik myth … were so powerful” that since his death, there haven’t been “claimants to the throne of Hebrew national poet.”

Realistically, that title may have been permanently retired.