To everyone under 40, and anyone outside of New York, the popular Catskills summer resorts of the mid-20th century must seem as distant, obscure and foreign as the Yiddish theatre.

The comparison is not inapt, for both institutions were important signposts in the history of Jews in America. And now, both belong more to the past than the present. 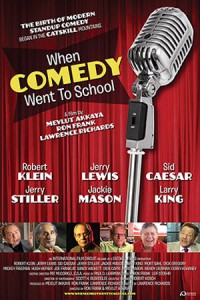 When Comedy Went to School, a new documentary by Mevlut Akkaya, Ron Frank and Lawrence Richards, picks a particular entry point to revisit the heyday of Grossinger’s and the hundreds of other hotels that catered to a primarily Jewish clientele: The multitude of Jewish stand-up comics who honed their routines on tough-to-please audiences, and eventually went on to success on television.

Hosted by Robert Klein and featuring interviews with Jerry Lewis, Jerry Stiller, Mort Sahl, Jackie Mason, Mickey Freeman and Larry King, When Comedy Went to School aims for an affectionate blend of entertainment and sociology with a poignant undertow of nostalgia.

As thrilling as it is to hear these sages and to see vintage clips of legends from A to Y (a young Woody Allen to Henny Youngman), the film suffers from a diffusion of focus. It delivers 76 diverting minutes, but leaves us still waiting for the essential documentary on the golden age of American Jewish comedy.

In the years before window air conditioners, Las Vegas, all-you-can-eat cruises and Birthright, the Catskill resorts were the preferred vacation destination for thousands of New York families. To Jews who’d grown up on the Lower East Side with 500 people crammed into every teeming acre, the wooded mountains were (you should pardon the expression) a breath of fresh air.

However, as Jackie Mason points out, the wide range of outdoor sports on offer wasn’t all that appealing to Jews, who preferred eating, sitting and kibbitzing. So the hotels in the Sour Cream Sierra (or, if you prefer, the Jewish Alps), emphasized food and entertainment.

Tummlers, or clowns, specialized in physical comedy with roots in vaudeville, and it comes as no surprise that Danny Kaye and Sid Caesar got their start in the Borscht Belt. But Jews also appreciated jokes, wordplay and stereotype flogging, which were the fertile domain of Alan King, Jack Carter, Buddy Hackett, Shecky Greene, Myron Cohen, Rodney Dangerfield and countless others.

When Comedy Went to School takes a stab at exploring and defining Jewish humor, but doesn’t arrive at a satisfactory answer. Curiously, neither Klein (reading Richards’ narration) nor the other comics cite their ability to gently satirize the aspirations and anxieties of assimilated and newly affluent Jews.

It’s kind of amazing, in retrospect, that so many Jewish comedians were embraced by the mainstream embodied by Ed Sullivan and Johnny Carson. However, the filmmakers’ decision to include clips from Sid Caesar’s Your Show of Shows, Lenny Bruce’s act and Mel Brooks’ History of the World: Part I — as understandable as it may be and as amusing as they are — distracts us from the focus on the Catskills.

The filmmakers deserve credit for pushing the staid bounds of the documentary form beyond talking-head interviews and archival footage by having Klein address us from the stage of an empty ballroom (rather than disembodied voice-over narration) and by including re-enactments (of ‘50s audiences at a stand-up show, for example).

Yet one can’t help wishing that When Comedy Went to School had been made 15 years ago, so the late Alan King, Henny Youngman and Rodney Dangerfield could have added their acerbic remembrances.