More than 75 years after Anne Frank, the best-known victim of Hitler’s Final Solution, perished at Bergen-Belsen, the famed teenage diarist’s afterlife is, for better or worse, a work-in-progress, like the diary itself, which she edited assiduously while in hiding. Initially published in the Netherlands in 1947, just two years after her death, “The Diary of Anne Frank” and Anne Frank’s story have been idealized, mythologized, universalized, commodified and popularized.

The diary and Anne Frank’s vivacious and heartfelt account of her life as a Jewish teenager hidden in what she called “The Secret Annex” in a warehouse, became standard reading in middle and high school classes. Every cultural or artistic medium — stage, film, television, novels, opera, ballet and now Twitter and TikTok — has a spin, and a claim, on Anne Frank.

Again, Anne Frank made headlines in January with the revelation of new theories on who betrayed the family’s hiding place. An extended “60 Minutes” report recounted the multi-year international investigation that Rosemary Sullivan examines in a newly published book, “The Betrayal of Anne Frank.” The book itself generated a new strata of trauma over the guilt of Holocaust victims themselves.

Can’t we just let her be who she was — a teenage girl with her hopes, dreams, love of Hollywood starlets, disagreement with her mother, and a crush on the cute boy upstairs? Can’t we let this young Jewish girl rest in peace?

“I think it’s too late,” says Lauren Strauss, a professor of modern Jewish history at American University. “But if people really care about Anne and learn some of the details of her story, they will learn that she was persecuted because she was a Jew.”

“It’s amazing that we’re still talking about Anne Frank in 2022,” says Neil Rubin, who chairs the Jewish history department at Beth Tfiloh Dahan High School in Pikesville, Md. “That tells me all I need to know about the lasting nature of her story.”

New York-based playwright Rinne Groff attributes the perpetual popularity of Anne Frank’s journals to her ability to narrate her experiences with an adeptness and vivid description of a far more experienced writer.

She notes author Francine Prose’s literary study, “Anne Frank: The Book, The Life, The Afterlife,” which asserts the diary is a work of art. “Prose says that we have to understand [Anne Frank] as an amazing writer, a serious writer, a writer who was thinking about writing and not just a girl keeping a diary,” Groff says. “She was thinking about herself as a writer and about publication. That allows us to feel we are let inside of her world.”

Groff, author of the play “Compulsion or The House Behind,” has long been fascinated by the many versions of Anne Frank she has encountered over the decades.

While most Americans, particularly Jewish Americans, are introduced to Anne Frank’s journal and story as they enter their teenage years — the diarist received her first diary on her 13th birthday — Groff, whose mother is Dutch, says, “I can’t remember a time when I didn’t know the name Anne Frank and hadn’t been to her house.”

This identification with Anne Frank by generations of teenagers around the world has become a part of many middle and high school curriculums. At the Dahan community school, students first read the diary in middle school, when they are about the same age as Frank when she began journaling. With his 11th-grade students, Rubin uses the diary as a starting point to explore issues of morality and humanity in the Holocaust.

At the Charles E. Smith Jewish Day School in Rockville, the diary is not in the curriculum, although it was in the past. Academic dean Aileen Goldstein notes that middle and high school students arrive with knowledge of Frank’s diary, either having read it or encountered the story through other media. She adds there is only so much time in the classroom with a subject as complex and vast as the Holocaust.

The diary, as Prose wrote, has had a long afterlife, both literary as a first-hand document of the Holocaust and in adaptations. These included a Broadway play, movie adaptations of the play, ballets, opera, a recent BBC television series, an official Twitter account from the Anne Frank House in Amsterdam, graphic novels, fan fiction and even cosplay videos on TikTok – where girls dress up, apply makeup and hairstyles to resemble the black-and-white photos of the teenage Holocaust victim.

Additional books, novels and articles illuminate the Anne Frank story from other perspectives, including those who knew her as a child, met her at Bergen-Belsen and or helped the families in hiding.

Initially, Otto Frank, Anne’s father and the sole survivor of the Secret Annex, hesitated to publish the diary, but, ultimately, he did just two years after the end of the war. It was his daughter’s wish to become a writer and she herself re-wrote, rearranged and edited sections of the diary. But in publishing, Otto Frank also sought to deemphasize the Jewishness of the diary in favor of universal ideals of humanity.

Jewish studies professor Alvin Rosenfeld teaches the diary every year in a course called “Anne Frank and Hitler: Studies in the Representation of Good and Evil” at the University of Indiana Bloomington.

“I wouldn’t say Otto de-Judaized the diary, but he certainly wanted to universalize it, not make it a story about just Jews,” Rosenfeld says.

And yet it was, and remains, a significant Jewish story: Otto Frank, his wife and daughters and the others went into hiding and, ultimately, all but Otto died solely because they were Jews.

In a sense, Otto Frank played an integral role in manufacturing the Anne Frank that generations now know, admire and turn to her quotes for Internet memes. Beyond taking out most Jewish aspects from the initial diary publication, her father also edited out criticism his daughter had for her mother as well as her blossoming into womanhood.

Mostly unknown, another writer, the prolific Meyer Levin, one of the first American journalists to enter newly liberated concentration camps in 1945, read the diary soon after it appeared and took up a personal crusade to bring it to larger audiences specifically because of its Jewishness. Levin and Otto Frank corresponded. The American reporter helped with the first U.S. publication, then reviewed it glowingly in the New York Times, and penned his own dramatized version of the diary, while seeking a producer.

But Frank had other ideas, which ultimately led to the 1955 Broadway production by Hollywood screenwriters Frances Goodrich and Albert Hackett, who adapted it for the big screen in 1959. This widely viewed and disseminated dramatization de-emphasized the Jewishness of Frank’s account. 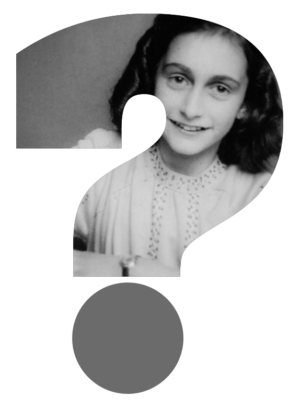 A play about making the play

In “Compulsion or The House Behind,” playwright Groff explored this lesser-known aspect about how Anne Frank’s diary and stage and film dramatizations became part of the cultural zeitgeist. Now, in succeeding decades it’s been commodified, praised and even misused — see recent arguments by vaccine and mask refusers that compare mask regulations to Anne’s persecution and death.

The play originally premiered in off-Broadway in 2011 with Mandy Patinkin playing the protagonist. A new production of “Compulsion” directed by Johnna Gruenhut is on stage at Theater J through Feb. 20.

The question arises: Does a Jewish theater need to do an Anne Frank play?

“Oh yes,” says Theater J artistic director Adam Immerwahr. “This is a play about obsession … but this isn’t a Holocaust play. Anne Frank is a character, but is played by a marionette puppet. This is a play about especially the American, but also the worldwide, question of what do we do with these stories from the Holocaust, and who owns them?”

That is the question that compelled Groff to dig into Meyer Levin’s and Otto Frank’s disparate visions of the parochial Jewish story or the universal one.

“Some of us believe that they’re both,” Immerwahr continues. “But, at the time these events happened, this was a matter of great debate.”

While “Compulsion” centers on the production and commodification of the Anne Frank play, it is set after the Holocaust. “Since I arrived at Theater J six years ago, there hasn’t been a Nazi uniform or a yellow star on the stage,” says Immerwahr. “We’ve told a lot of Holocaust stories, but, in my time here, we have yet to do a play that is set in and during the Holocaust.”

Instead, productions included plays about the American response to the Holocaust or its after-effects.

Asked why, he replies, “This is about my own obsession with how we talk about the Holocaust in Jewish arts and cultural spaces. How do we do that in a way that is respectful and not taking advantage of it in some maudlin way.”

Former Theater J artistic director Ari Roth notes that over his 18-year tenure, he produced more work about the Holocaust than any other subject, except Israel. In programming Holocaust-themed works, he says, “It was important that it be enlivened and not feel rote and not feel like [the Holocaust] was codified to be lifeless and prone to having blasé or cynical reactions to it.”

Groff, the playwright, sees “Compulsion” as a play about making a play — it’s sausage-making about the complexities of relationships and artistic struggles that go into an artistic product. With her expertise in devised theater, she consciously decided not to make the young Anne a living character in the play. And the metaphor of her as a puppet —formed by papier mache pages from the diary — operated by strings reflect the conscious efforts to re-tell, reimagine, re-create, revise, even reinvent this history, so every generation has its own Anne Frank, and everyone, Jew and non-Jew alike, can feel a personal affinity to her.

“The reason ‘The Diary of Anne Frank’ as a play became so successful,” Groff says, “is that it was easier to digest because it ends before Anne Frank dies horrifically in a concentration camp thinking that every single person in her life had been murdered. She was starving, lice-ridden, abused …. ‘The Diary of Anne Frank’ play ends before she goes to a concentration camp. There is something about being spared that ending that allows us to engage with the story without being overwhelmed by it.”

Rosenfeld, the professor, a member of the executive committee of the U.S. Holocaust Memorial Museum, concurs that “The Diary of Anne Frank” “is an anticipatory text of the Holocaust, it …. doesn’t make people too uncomfortable. To read Elie Wiesel’s ‘Night’ or Primo Levi’s ‘Survival at Auschwitz’ or other books, we encounter a great deal of grief and experience life at its very worse because that’s what life was for Jews during that time.”

“So,” he concludes, “Anne Frank serves this purpose.”

Strauss finds that in many places in the world and right here in the United States, basic facts about the Holocaust aren’t known.

The danger, she says, is not that every generation will discover its Anne Frank, but that “hers will be the only story that’s told. It will become some kind of sanitized, overly universalized version of her life. And that will be the only Holocaust experience that anyone knows about.”