Yes, Elie Wiesel was a survivor who became the symbol of Jewish suffering and endurance. Yes, he was a fine writer, whose “Night” helped jolt the world’s conscience and change the widespread indifference to the Holocaust. Yes, he won the Noble Peace Prize in 1986.

But, says Nadine Epstein, a friend and the editor of the book “Elie Wiesel: An Extraordinary Life and Legacy,” he was so much more. Showing his humanity — demonstrating that he was not “one-dimensional” — was one reason that she conceived of, and created, the book.

“He was a lovely, gracious man who actually had a mischievous twinkle in his eye,” says Epstein, who is editor-in-chief and CEO of Moment magazine, based in Washington.  “He was capable of being really encouraging — he was incredibly encouraging professionally to me — and to many other people.

“He also had an ability to reach people in ways that they understood. He wasn’t an ideologue, and he managed to meet and befriend Republicans and Democrats, people who had all different points of view. He listened to African Americans and Sudanese, to Rwandans, Cambodians, Armenians and Palestinians, and he managed to have conversations with them.”

Epstein says she also shared with her friend and mentor a love of music.

“Music was very important to him, and he had a beautiful voice,” she says.

Shaken by Wiesel’s death in 2016, Epstein says she resolved to do a book about him. In the course of her interviews and conversations for the book, she says she learned far more about him than she had previously known.

The book contains a brief pictorial history of Wiesel; some of his speeches and writings, including a 2013 interview in Moment, which Wiesel helped found in 1975; observations by young readers about “Night” and discussion questions for that book; and 40 reflections about Wiesel based on interviews.

Epstein says she chose the interviewees to provide “a wide range of voices and points of view. … Some people knew him and others didn’t know him quite as well but had unique perspectives.” 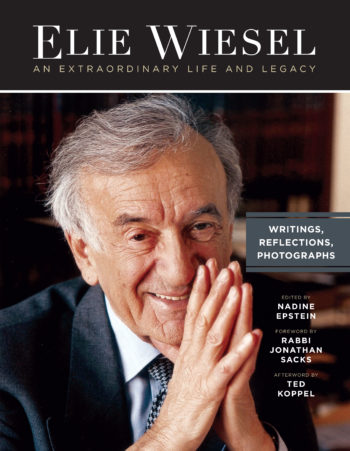 In his interview, Patrick Desbois, a Catholic priest whose Yahad-In Unum searches for and documents mass graves of Jewish victims of the Nazis in Eastern Europe, says there is a danger that Wiesel and his work will be forgotten because “people do not want to think about genocides.”

Epstein acknowledges that danger, saying that she often speaks to non-Jews who don’t know anything about Wiesel or the Holocaust and even Jews whose knowledge of him is limited to knowing that he wrote “Night.”

“One of the reasons I decided to do this book,” she says, “is that it is incredibly important that people know about him and the Holocaust.”

Former TV journalist Ted Koppel, who anchored ABC’s Nightline for 25 years, presents a completely different — and fascinating — perspective. Wiesel was “clueless” about American popular culture, he says, noting that despite teaching in St. Petersburg, Fla., in 2009, and a massive advertising campaign for the event, he had no idea that the Pittsburgh Steelers and Arizona Cardinals were to play in the Super Bowl across the bay in Tampa,. Nor had he even heard of the Super Bowl itself. Driving his friend to an event, Koppel notes that Wiesel marveled that the TV anchor could pump gas into his car.

Wiesel’s unfamiliarity with the Super Bowl and gassing up a car were not signs that he was “an intellectual snob,” Koppel says. “A lifelong struggle against inhumanity had left little room for the ordinary, the mundane.”

The book is full of photos, all solid, many wonderfully expressive, but at least two that I found almost unbelievably powerful and moving. The full-page shot of Wiesel accompanying the Koppel essay comes as close as I’ve ever seen of a photograph displaying a person’s soul.

And the picture of Oprah Winfrey, clutching his arm outside of Auschwitz and clearly trying not to cry, is the personification of one of our species’ finest qualities: empathy.

Epstein says her book has been well-received since its publication this spring. She hopes it is accessible to a wide range of readers, “from those who are Jewish or not Jewish, to high school students and to everyone 12 to 120.” She believes it will prove useful for classes in public and Jewish schools and for discussions in synagogues.

Robert Siegel and Nadine Epstein will discuss Elie Wiesel: An Extraordinary Life and Legacy at Politics and Prose in the District on June 29 at 6 p.m.

Aaron Leibel is a former editor at The Jerusalem Post and Washington Jewish Week.