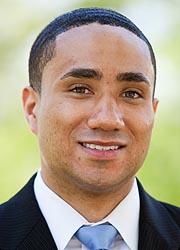 In Smith’s single term in the House of Delegates, he has advocated for legislation related to criminal justice reform, employment and reemployment rights of veterans, and family law.

The Silver Spring native said he believes his roots in Montgomery County will help him fill the shoes of Raskin, who became a state senator in 2007.

“I grew up in this community, so I’ve been connected to it for a long time,” Smith said. “I [also] come from the same philosophical background as Jamie Raskin,” which means making Montgomery County the “epicenter of progressive politics for the State of Maryland.”

Hogan also appointed Del. Barbara Robinson (D-District 40) to represent Baltimore City in the state senate, filling the seat left by Catherine Pugh, who was elected mayor of Baltimore in November.

“I am confident that Barbara Robinson and Will Smith will continue to be strong advocates for their constituents in the state senate,” Hogan said in a statement. “I offer my sincere congratulations to the new senators and look forward to working with them in their new roles to change Maryland for the better.”