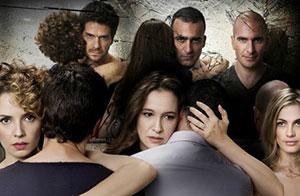 With Showtime’s popular “Homeland” series set to launch its third season Sunday, Sept. 29, the DCJCC is screening the Israeli television series that inspired it.

Spread over 2 seasons, “Hatufim” tells the story of three soldiers, two of whom return home alive carrying the remains of the third, 17 years after being captured while on a covert mission in Lebanon. But where “Homeland” places more emphasis on the clandestine elements of counterterrorism, and a scenery-chewing performance by Claire Danes as the dangerously obsessive CIA officer Carrie Mathison, “Hatufim” is a study of soldiers returning home, grappling with the complexities of everyday life.

The setup of “Hatufim” sees the two soldiers Nimrod Klein and Uri Zach thrown into a disorienting new reality without any bearings. Uri Zach’s former girlfriend has married his brother and they have a child together. Nimrod Klein returns home to find a son who he has never met (he was born after Nimrod was taken captive).

To make matters worse, Nimrod and Uri are placed under intense scrutiny upon arriving home. News vans stake out their private residences, tracking the soldiers’ movements in the hopes of snapping images to plaster all over the newspapers. Similarly, the Israeli military uses surveillance – recording the soldiers’ private conversations in an interrogation facility — to find out whether the two divulged any government secrets during their many years of captivity.

What’s refreshing about “Hatufim” is that it’s not afraid to go nuts. The series doesn’t shy away from the psychological effects on both the soldiers and their families. Adi Ezroni gives a memorable turn as the deceased soldier’s sister, Yael, who struggles to move on, seeing him in visions everywhere.

“Homeland” has the look of a typical Hollywood production: crisp sound design, elaborate sets that recreate the shadowy halls of the CIA, and cinematography that is, by turns, muted and vibrant. “Hatufim,” on the other hand, eschews the hallmarks of a big-budget production for a more intimate and grittier style. With minimalist aesthetics – conventional editing techniques, understated piano notes and bare cinematography – the emphasis lies squarely on the characters and dialogue in, for the most part, everyday environments. If there’s a fault in the series, it’s that it occasionally falls prey to network TV cliches: the mock news reports and flashback narrative structure would have been best left on the cutting room floor.

In “Hatufim” and “Homeland”, we see that the post-9/11 political climate has piqued mainstream interest in the field of intelligence gathering, espionage, and the general efforts to thwart terrorist cells. And the relationship between counterterrorism on screen vs. the reality is a fascinating one that begs to be explored.

For more on this, Washington Jewish Week spoke to Dr. Peter Romaniuk, an associate professor of political science at the John Jay College of Criminal Justice, part of the City University of New York, and Senior Fellow at the Center on Global Counterterrorism Cooperation (CGCC), a non-partisan, non-profit counterterrorism policy think tank.

As the name suggests, the CGCC is “mission driven, in terms of wanting to develop partnerships and cooperation,” Dr. Romaniuk says. “We certainly see ourselves as wanting to facilitate the development of balanced and proportional counterterrorism. Policies that are also effective in responding to the range of threats that our donors face.”

From someone who knows counterterrorism well, does the story in “Homeland” bear any resemblance to real life? “Well, if you go and read the scholarly literature, or government documents concerning terrorist threats to the US, you can see the writers massaged that sort of threat analysis for dramatic effect, as they have liberty to do in order to maximize entertainment value,” Dr. Romaniuk says.

As for the characters in “Homeland,” Carrie’s, in particular, “It’s very difficult to believe that somebody with such a significant condition [bipolar disorder] could be uniquely invested in the analysis of this threat, which as it turns out was an extremely grave threat,” Dr. Romaniuk points out.

What does “Homeland” get right? According to Dr. Romaniuk, the show parallels the “interagency rivalries regarding the sharing of information, the staffing of certain tasks. And there is a lot of discussion regarding the extent to which the intelligence community actually works together.”

In the end, a series like “Hatufim,” or indeed, “Homeland” is in an “interesting position where they’re both trying to give a fictional account of a story that’s got enough plausibility to keep the audience engaged,” Dr. Romaniuk adds. While both shows may veer from the reality of the inner workings of counterterrorism, they more than make up for this with the potency of emotions and ideas onscreen.