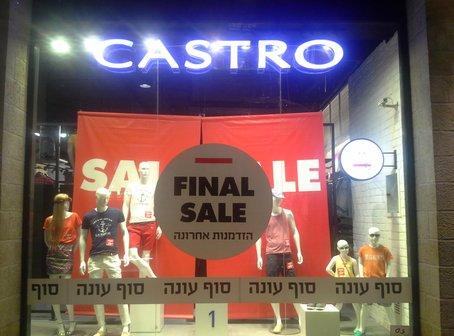 JERUSALEM — There was a time in the not so distant past when a visitor to Jerusalem’s high-end outdoor Mamilla Mall just outside the Old City’s Jaffa Gate would strain to hear Israel’s native language of Hebrew. Among the throngs of people perusing the jewelry stores, fashion houses and art galleries during the height of the summer tourist season would be visitors from North and South America, Europe and Asia.

But on Wednesday night, such tourists were nowhere to be found and the thoroughfare lined by Rolex, the Gap and upscale restaurants was reduced to the equivalent of a municipal mall found in a dust-strewn Israeli town like Beit She’an or Kiryat Malachi. There were still people, but they were locals.

And they weren’t spending.

“We’re hurting,” surmised Esther Berdugo, 60, standing outside the Israel Antiquities store she’s worked at for seven years, her back leaning against the ubiquitous Jerusalem stone that lines buildings new and ancient here in the Israeli capital. “We feel it. We feel it in the stores. There are no tourists, just Israelis.”

She pointed to the Rimon Café across the street to prove her point.

“People over there used to stand in line to wait for a table, it was so busy,” she said.

At 8:30 that night, just a handful of people patronized the restaurant. Most of them sipped coffee.

Over at the A & F Brands Factory Store, one of the first storefronts people encounter when they walk through the mall’s entrance facing the pricey David Citadel hotel, clerk Dan Levi, 23, walked among the retailer’s displays of button-down shirts and designer jeans. No one else was in the store.

“In July and August, we get 20,000 people per day walking through Mamilla,” he said. “Since the war began, it’s 6,000. And we depend on the business during the summer to carry us through the winter season.”

As Israel entered its 17th day of fighting its Operation Protective Edge against Hamas – the economic realities of decreased tourism notwithstanding — life continued more or less as before. Air raid sirens hadn’t been heard here for several days; cars and buses still moved along such central thoroughfares as King David and King George streets; pedestrians still clogged the small sidewalks along Agrippas Street leading to the famed Mahane Yehuda market.

But beneath the surface were the worries and concerns of shopkeepers like Berdugo, who realize that with each additional day of fighting in Gaza, Israel’s economy gets more and more isolated. When asked what she felt about the planeload of North American immigrants who arrived in the country just a day before, Berdugo’s face lit up. Like many Israelis, she spoke effusively of how important it was for foreign Jews to cast their lot with Israel.

“I am inspired,” she said. “The Jewish people are one. This is very important. But even more so, they’ve come because they truly love the land.”

But press further, and some locals can’t help but call the new arrivals “crazy” for giving up easy lives in places like the United States for a life of hardship in a dangerous part of the world.

Yoel Cohen, former chairman of the School of Communication at Ariel University and author of God, Jews and the Media, explained the dichotomy in Israeli attitudes as part of how they view the Diaspora Jewish community in general.

The lack of interest only goes so far, however, and in times of existential crisis or when anti-Semitic attacks threaten Jews abroad, said Cohen, Israeli attitudes reflect more of an identification with a united global Jewish community.

That sense of shared identity goes both ways, said Rabbi Jacob Blumenthal of Shaare Torah in Gaithersburg. Wrapping up a four-week visit to the Jewish state, Blumenthal said that witnessing war from the perspective of a non-tourist — he took part in a rabbinical conference run by the Shalom Hartman Institute in Jerusalem — has strengthened his sense of Jewish identity.

“I’m still trying to process everything and decide what it’s all really about,” he said of the ongoing conflict. “But it’s deepened my sense of Jewish peoplehood.

“It’s striking that in my program of 27 rabbis, nobody went home [when the fighting started]. Everybody stayed,” he continued. “So on the one hand, yes, people decided this might not be the best place to take a vacation, but I’ve seen lots of people stay.”

And while he experienced firsthand what fleeing to a bomb shelter is like when air raid sirens sounded in Jerusalem weeks ago, a recent trip to the war-torn community of Sderot just a mile from the Gaza Strip afforded Blumenthal the “opportunity,” he said, of witnessing just how “normal” life in Israel is during a war.

“There’s a tremendous pride and strength [among Israelis], a sense that we’re not going anywhere,” the rabbi said of locals in Sderot. “And throughout my time in Israel, I feel incredibly protected, as long as you follow directives. It’s a strange feeling to hear a siren while on a bus. You pull over like every other car, you crouch down and you protect your head. Then the siren is over, you wait a couple of minutes and everything starts up again like nothing happened.”