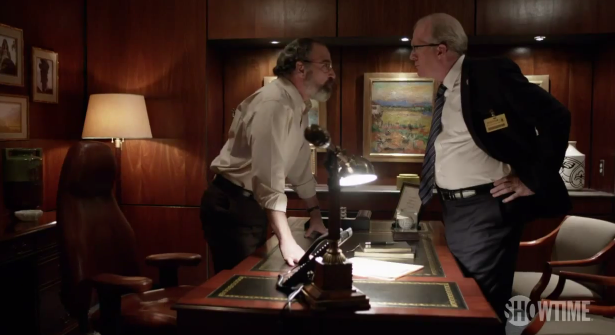 A somewhat dull episode was to be expected after last week’s numerous OMG moments and this wouldn’t be Homeland without some filler/setup. Focusing mostly on Saul’s questionable CIA tactics and his relationship with Javadi, “Gerontion” proved to be a Mandy Patinkin acting showcase and, yeah, that was basically it.

CIA: After committing a bloodbath and getting punched in the face by Saul, Javadi was being interrogated but couldn’t answer questions properly because his nose was bleeding. Seriously? This guy is kind of a wuss. Once the bleeds stopped, he heard out Saul’s plan: become the Nicholas Brody of Iran. In other words, be a traitor to his country by giving Saul intel and whatnot.

Everyone was cool with this except for Fara and Sen. Lockhart. Fara was upset because she’s Iranian and thinks slime-ball Javadi should be tried for embezzling money that funded the Langley bombing. And Lockhart, who was eventually informed of the plan and the Saul/Carrie trick, was super upset — especially once he found out Javadi was on a plane back home to Iran. Saul didn’t care what Lockhart thought because he’s still acting CIA director, and locked Lockhart in a pitch-black room for kicks and giggles (so he wouldn’t call the president). Despite being in the same out-of-the-know position as Lockhart, Dar was pretty cool with Saul’s decisions and celebrated with some Scotch. Those two would celebrate with Scotch.

The story of who actually made the Langley bomb and moved Brody’s car has been hanging around like a stray cat. Javadi finally revealed that he knew it was one of Abu Nazir’s men (duh), it wasn’t Brody and his sketchy lawyer knows who it is. Now, Carrie is back on another “prove Brody’s innocence/guilt” mission, and she’s enlisted Quinn for help.

Quinn: Rupert Friend’s character has been a great addition to the show but boy, has he gone through some tough times this season. First, he shot a kid. Then, he (and Carrie) left the scene of Javadi’s grisly crime. And then, he was caught on the neighbor’s candid camera at the scene of the crime. To top it all off, Carrie still won’t have sex with him (kidding — but not really).

Quinn took one for the team when he confessed to police he killed Javadi’s ex-wife and daughter-in-law. They knew he was lying but there was nothing they could do since he confessed, except tell him how awful the CIA is and that they’re a bunch of life-ruiners. Now, Quinn seems to think the same thing and wants to quit but can’t, because Carrie needs things.

Brody family update: They all died except Chris, who quit school to become a drug smuggler in Mexico (actually, our favorite family wasn’t featured in this episode, but someone should make this storyline happen).

Mira Mira On The Wall: Guess who was in Mira’s bed? Not Saul! Just as Saul told Mira on the phone he was upset by her confession of feelings for Bernard, that little rascal was cozying up to her in between the sheets. Now, someone has a guilty conscience.