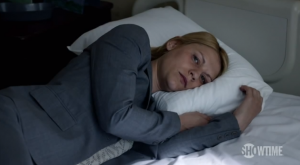 So let’s talk about that twist. The first two seasons saw Brody fooling everyone except Carrie and later the CIA. Now, the show runners have decided to fool us. And it worked! While it wasn’t extremely jaw-dropping, it’s nice to see the writers/show runners haven’t lost faith in Carrie and Saul.

It turned out that Saul’s outing of Carrie’s antics on national television and Carrie getting herself thrown into a mental institution and then defecting to the traitor-law-firm people was all an act. The end of “Game On” made it clear that shortly after the Langley bombing, Carrie and Saul hatched a plan to lure members of the Iranian group responsible out into the open. The best way to do this was to present a broken CIA worker that would be seemingly vulnerable to switching teams. Who better to take the role than Carrie herself?

CIA: Quinn was MIA. Saul and Fara continued to figure out the identity of the final client in the Iranian group, who’s going by the name of Majid Javidi. Instead of nabbing him like Fara wanted, Saul decided it was best to catch him and interrogate him, so they’ll be needing Quinn.

Brody family update: Dana ran away and continued to be her reckless self. Leo escaped rehab and hitched a ride with Dana, and they basically did what all normal teens do when they run away from home: Get drunk in a cemetery! Jessica was once again distraught and considered herself a terrible mother, but Shane Oman from Mean Girls, I mean, Mike, returned to our TV screens to save the day. And by save the day, I mean do the usual by comforting Jessica with his manly voice. He did provide some new information on Leo though, who had a suicide pact with his brother that didn’t go as planned. Glad to have you back, Mike. The most important question in this Dana runaway saga (that still connects to the other plots in no way whatsoever) is this: What does Chris think? And who’s Chris, you ask? Why, he’s Dana’s brother. I finally remembered his name, and he wasn’t even in this episode.

Carrie Land: It’s weird to even write about Carrie’s psych ward story since it was all pretend. CIA (most likely Saul) closed her bank accounts, canceled her credit cards, wouldn’t let her leave the psych ward and left her as broke as a joke. Redheaded random liquor store hookup man from the season premiere got robbed thanks to Carrie and Saul’s plan. Poor guy.

Anyway, the sketchy law firm guys got her out, which she knew was going to happen. She also knew they’d talk her into giving their client information on how the CIA was able to locate the other six in his Iranian terrorist group who are now dead. Carrie agreed, but then she went straight to Saul saying they bought the act. The end!

Best scene: Once again, the final scene. The revelation of Carrie and Saul making everyone look like idiots was great, because it basically told the audience that Carrie and Saul will always be best friends forever. One of them may have to check herself into a mental institution and submit to worldwide humiliation for the other, but with friendship comes sacrifice, I guess.

A journalistic lesson that needs to be learned again

‘The rocket sirens were blazing’