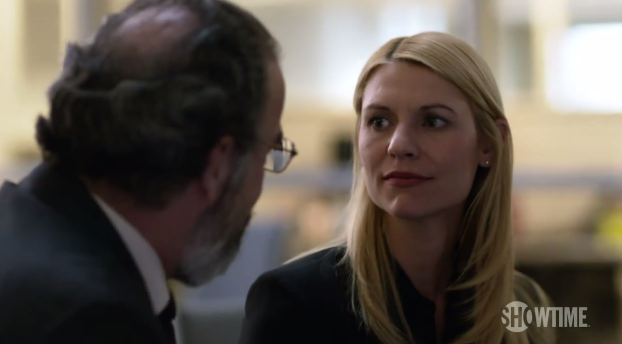 I’m really sad, exclaimed a teary, eight-months pregnant Carrie Matheson, after she came to the realization she didn’t want to keep her baby. I said the same thing when this fantastic season finale was over. It was intense, dramatic and powerful but, above all, really really sad.

“The Star” would have been a truly perfect series finale of Homeland. Brody died, Saul was ousted at the CIA, but his mission to grant the U.N. permission to supervise Iran’s nuclear program was fulfilled, and Lockhart gave Carrie a new position in Istanbul to monitor Javadi, who’s been doing a more-than-decent job as Iran’s new leader. Come to think of it, how was this not the series finale? It even ended with Carrie drawing her own special star at the CIA memorial after Lockhart refused to give Brody an official one. It was the perfect ending! Carrie’s Istanbul job was the only setup we got for next season, but now that Brody is finally out of the picture, I can’t say I have faith that the show runners will come up with fresh story lines to get viewers to tune in for Season 4. There’d only be so much of “Carrie Matheson Takes on Motherhood” we could take. Anyway, here’s the Season 3 finale, which I broke down in stars because of the title, duh.

Five stars for the beginning sequence when Brody smoothly made his way out of Akbari’s headquarters after he just murdered the guy. But really, how could he forget to leave his visitor’s pass before walking out? Another five stars to Carrie when she successfully got Brody to the safe house without any problems. Even though it was all for nothing, Carrie was in CIA-pro mode. One star for the U.S. president’s decision to allow Brody to be executed, mainly because it really sucked for Carrie, who was surprisingly sympathetic throughout the entire episode.

Five stars to Claire Danes and Damien Lewis, who gave impressive performances throughout the episode, but especially in the safe house. Carrie revealed she was pregnant to Brody, who had been sulking because he’s a harbinger of death and Dr. Fabulous accused him of being an “unkillable” cockroach. “Unkillable” isn’t a word, Homeland. Carrie’s revelation certainly changed Brody’s attitude for the better, though. But then we found out the president already made the call to have Javadi order Brody’s capture and imprisonment for Akbari’s murder. But, five stars to Javadi when he cleared things up for Carrie. Brody’s execution had to happen, he told her. He also said that yes, Brody did indeed complete his mission, but him staying alive was never part of the plan. It was only part of Carrie’s plan, and Javadi straight up told her that everything she had done — most notably getting herself checked into a mental hospital, was for Brody. So true.

Four stars to the heartbreaking final phone call between Carrie and Brody, and the equally painful phone call from Saul, who told Carrie that nothing more could be done. And four stars for the entire execution sequence, but one star for when we were forced to watch the incredibly brutal and long, drawn-out hanging.

Zero stars for not giving us Brody’s family’s reaction. For once, I wanted to see what the Brody family was up to after finding out the news. If the first half of the season felt such a need to make us care about them, why couldn’t they give us some closure? Their exclusion in the finale made the Dana time forced upon us feel even more unnecessary than it was. But hey, no worries. It was recently reported that the actresses who play Dana and Jessica, Morgan Saylor and Morena Baccarin, have basically been cut out of next season.

Four stars to Carrie when, four months after Brody’s death, she finally shared her feelings and admitted she was scared and sad about the looming birth of her daughter. She’d been holding this in since she first discovered she was pregnant, and it was refreshing to see her share her emotions with her family. Also, a million stars to Quinn for always being there for Carrie and for when he refused to let her smoke cigarettes while pregnant.

Five stars to Saul and Mira when they showed us they knew how to vacation and party, Kardashian-style, at lavish beach destinations. But one star to Saul’s questionable fedora and vacation outfit. Oh, and negative 10 stars to Dar Adal and Saul when they ordered plain Belgian waffles (butter on the side) at that diner. Who actually does that? At least get some whipped cream and strawberries on top.

Finally, 1,000 stars to Carrie when she drew her own star with a Sharpie as tribute to Nicholas Brody. I’m sure Lockhart will be upset with the graffiti, but who cares?