Israel’s Galilee is one of the best wine regions in the country. I recently enjoyed a brief excursion there to visit some choice wineries, including the wonderful Adir Winery.

The visitors’ center at Adir is an excellent booze tourism destination. The winery was established in 2003 by the Rosenberg and Ashkenazi families, but its first vines were planted decades earlier.

The Rosenbergs began planting grapes on the slopes in 1988. 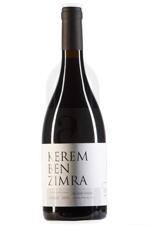 Meanwhile, the Ashkenazi family began raising goats in the area — the largest herd in the country and since 1995 the largest in-house maker of goat’s milk. They make exceptional goat cheeses and dairy products.

As the Ashkanazis’ reputation for dairy farming and the Rosenbergs’ reputation for grape cultivation grew, they decided to team up. In 2003 they founded the Adir Winery and Dairy. Adir in Hebrew means “noble” or “mighty.”

The stylish visitor’s center in the Dalton Industrial Park, joins both winery and dairy components, offering delicious meals, wine and cheese workshops, and even recreational packages — making the most of their Galilee location. Between the wine and the dairy products, the Adir visitors center is a must-visit destination for lovers of Israeli wine and for foodies.

Vinified by family winemaker Avi Rosenberg, the Adir wines are impressive and uniformly good to excellent, well worth seeking out.  Adir produces eight wines, released in four series. Their “Kerem Ben Zimra” series includes two reds and a white; their “A” series includes both a red and a white; their flagship “Plato” red wine is their contender for “big” and “complex.” Their two dessert wines are a port-style red and a port-style blush.

Imported to the United States by Red Garden Imports, here are three current Adir Winery wines to seek out and enjoy:
Adir, Kerem Ben Zimra, Cabernet Sauvignon, Galilee, Israel, 2014 ($40): This is a stylishly big wine with dark fruit, red cherry and herbal aromas that move easily into lush flavors of currants, plum, cassis and raspberries with some graphite, oak and mild spiciness leading into the pleasing finish. Though young, it is hugely enjoyable now and will be even more approachable in three years, after the various components have melded together a bit more.

Adir, Kerem Ben Zimra, Shiraz, Galilee, Israel, 2014 ($40): Leading with bright red berry fruits and mild spice notes, this is aromatic and tasty, with black pepper, violets, black cherries and plums, it has an herbal streak riding refreshingly through the palate, lending a lighter element to the overall complexity and sophistication of this charming if slightly reserved shiraz.

Adir, “A”, R, Galilee, Israel, 2013 ($60): The label is a touch confusing at first, but this “A” series red blend (hence the “R” on the label, as opposed to the “W” for the white blend) is a big, bold, fabulous, juicy marriage of 60 percent shiraz, 30 percent cabernet sauvignon, and 10 percent cabernet franc, offering delicious black pepper, cherry berry notes, cassis and a slightly intriguing green pepper element. It has magnificent concentration of flavors and superb balance, and will benefit from additional short-term cellaring to tame the profile a bit, but is great now. L’chaim!