Adas Israel Congregation last week joined a growing number of Conservative synagogues that are live-streaming Yom Kippur services over the Internet — a controversial move because the Conservative movement’s central authority on Jewish law says using electronic devices violates the prohibition against working on Shabbat and holidays.

The synagogue, in the District of Columbia, wanted to make religious services available to members unable to attend, said Senior Rabbi Gil Steinlauf. The decision came after two years of deliberation.

“At the end of the day, it is our recognition of our desire to be truly inclusive that takes precedence and enables us to come to this” decision, Steinlauf said.

In 2012, the Committee on Jewish Law and Standards, which sets halachic policy for the Conservative movement, ruled that the use of an electronic device on Shabbat is prohibited because it creates a record, similar to writing.

In discussing whether to stream services, Adas Israel considered whether doing so would cause people to break the laws of Shabbat and holidays. Steinlauf said in his opinion the answer is no.

People routinely break the laws of Shabbat when they use smartphones and other technology on holy days, he contended.

Meanwhile, Congregation Beth El of Montgomery County, a Conservative synagogue in Bethesda, also live-streamed Yom Kippur services this year, as it has previously.

“The decision for us to start [streaming] was because a grandfather of a bar mitzvah had Lou Gehrig’s disease, and was not able to be here with us,” he said.

Beth El’s technology works largely through timers and is monitored by non-Jewish staff when members are observing the holiday, he said.

The feedback has been positive.

Adas Israel President Deborah Joseph said she “got an email yesterday from a very grateful congregant who was not able to be here on Yom Kippur.”

A live-streamed service that claims to be the world’s largest was broadcast from Los Angeles on Yom Kippur. Nashuva, a Jewish “spiritual community” known for its outreach, live-streamed the Kol Nidre service to an estimated 60,000 viewers. It was led by Rabbi Naomi Levy, a graduate of the Conservative Jewish Theological Seminary. 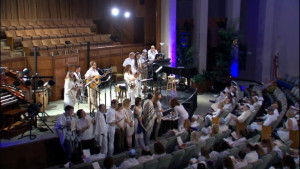 But the decision to live-stream is far from unanimous in the Conservative movement because “like any good collection of rabbis, there are disagreeing opinions,” Steinlauf said. “Every rabbi in every [Conservative] synagogue is the halachic authority” and interprets Jewish law for his or her community.

“It just doesn’t feel Shabbasdik,” he told the Washington Post in a 2013 article, using a Yiddish word for the special atmosphere of Shabbat.

Seidel said he is concerned about who, in addition to members, would be watching the streamed religious service.

Beth El’s live-stream is open to the public; Adas Israel’s is password-protected so that only synagogue members can view it.

Seidel also questioned whether attendance would drop if services were streamed online.
Harris isn’t worried. People come to synagogue for more than to listen to others pray.

JTA contributed to this report.