When Alicia DePaolo was younger, she began to look for ways to bring her Jewish and musical identities together. This search led her to find her passion for Jewish Baroque music and to create the MIRYAM Baroque Ensemble. DePaolo, 32, is also the program and worship coordinator for Bethesda Jewish Congregation.

How did you discover Jewish Baroque music?

My mother is a musician and my grandmother was a musician. I grew up singing in choirs, went to music school for my master’s degree at Indiana University, and was thoroughly steeped in the Western classical tradition. I had a church job for a very long time and found the body of Western classical, sacred music incredibly moving, but I always felt that it was separate from my Jewish identity. I was looking for a way to bring my Jewish identity and my musical identity together. I found other Jewish musical colleagues who had the same desire to bring these parts of their identity together, and we started looking at ways to make that happen.

Can you describe Jewish Baroque music and what the MIRYAM Baroque ensemble is?

When we talk about Baroque music, we’re typically talking about the period that ended after the late Renaissance. Famous Baroque composers include Vivaldi, Handel and Bach.

What do you love about this music?

When I am singing this music, it is the best feeling in the world because it is bringing two parts of my identity together. It’s a musical style that I find incredibly moving, and when it’s combined with Jewish text in a Jewish space, it really is an incredible feeling to be able to bring all of those elements together. This music is incredibly transporting. Setting Jewish texts is incredibly powerful, but together, the music and the text just have this incredible power to transport the listener and the performer as well.

How has the ensemble adapted during the pandemic?

We put on one virtual performance where we recorded individually in our own homes and then stitched it together through video editing. It’s a pretty lonely experience because what is so meaningful about music making is the connection and the communication with the other people in the room. Also, it’s really easy to be a perfectionist because when you’re performing live, you get one shot and it’s done. But when you’re pre-recording a track — I must have done 30 or 40 takes of each movement just because I could. There was nothing stopping me. I was up until two or three every night just doing the editing, trying to get it all together, but it was worth it.

My ultimate goal is rabbinic ordination. I’m looking toward entering rabbinical school, hopefully within the next few years. That’s my ultimate career goal. I’ve been really lucky to find some incredible mentors that have supported me in that. I also love hanging out with my cat, Benji, and my partner, Katie. My partner is also a musician, so we really enjoy singing together. I’ve been working on learning how to accompany some of our favorite pieces, the Britten folksong arrangements, so we’ve been singing those together, which has been really fun. 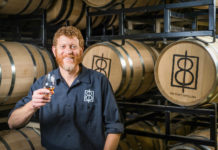