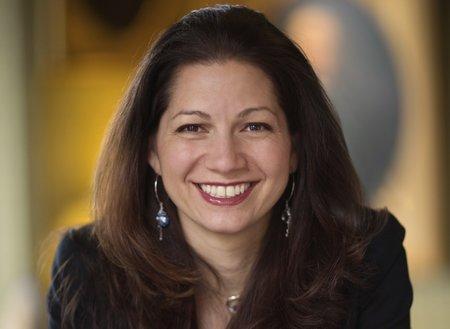 Whether belting an aria, strumming a folk tune or giving a TEDx speech in front of an audience, Allison Shapira, 37, is at home when she is on stage.

After graduating from Boston University with a major in Italian language and literature and minor in music, Shapira took a job as an information officer at the Israeli consulate in Boston, working her way up to the post of director of public diplomacy. That move led to a public-speaking career and to founding her own company, Global Public Speaking LLC, which she took full time three years ago when she moved to Washington.

Shapira also holds a master of public administration in negotiation and leadership from Harvard University Kennedy School of Government where she currently teaches as an adjunct lecturer in public policy.

The Washington resident also travels around the world with nonprofit Vital Voices Global Partnership, teaching public speaking to women leaders, and tours as a folk singer.

She recently took time to talk with us about the similarities between opera singing and public speaking, her interest in the Italian language and the favorite thing about living in Washington.

How did you make the transition from opera performance to public speaking?

My first real job out of school was working at the Israeli consulate, and on the first day of that job I found out I had to give speeches literally on behalf of the state of Israel during the Second Intifada. I was terrified of giving a speech and so I joined Toastmasters International and through studying public speaking I realized I already knew public speaking because of my operatic background and I started to coach the diplomats with their public speaking and then people outside of work started to come to me for advice and coaching and then that’s how I started my training business.

Are there similarities between taking the stage to sing for an opera and speaking in front of an audience?

Absolutely. There is the importance of making eye contact with your audience. Of creating an emotional bond with them. Taking them on a journey. It may be a professional journey as opposed to a musical journey, but you’re still in charge of your audiences’ experience. In music you need stage presence, in public speaking you need executive presence. There’s a transition to be made from one type of presence to the other, but in both situations you need to be able to stand on stage confidently, to know what you’re doing, whether you know your subject or you know your music, and then to focus on your audience and giving them an impactful and meaningful experience.

What interests you about the Italian language?

I started learning Italian when I was studying opera and I fell in love with the language — although to be honest modern Greek is my favorite language to speak — but I fell in love with the sound of Italian and became an Italian literature major so I could go to Italy and study in Italy. I spent a year there and I’m fluent in Italian as a result; it’s still a language that’s very near and dear to my heart.

What is your favorite thing about living in Washington?

I love the energy here. I love the idea that so many people come here with purpose and with passion. They come here for a reason. They want to achieve something. It’s something beyond themselves. They’re here on behalf of their country. They may not achieve that because many of us are here trying to achieve things that take time and may not be realized, but they are here with a purpose and that makes it a very exciting, constantly growing city to live in.

What is the biggest fear people have when approaching public speaking?