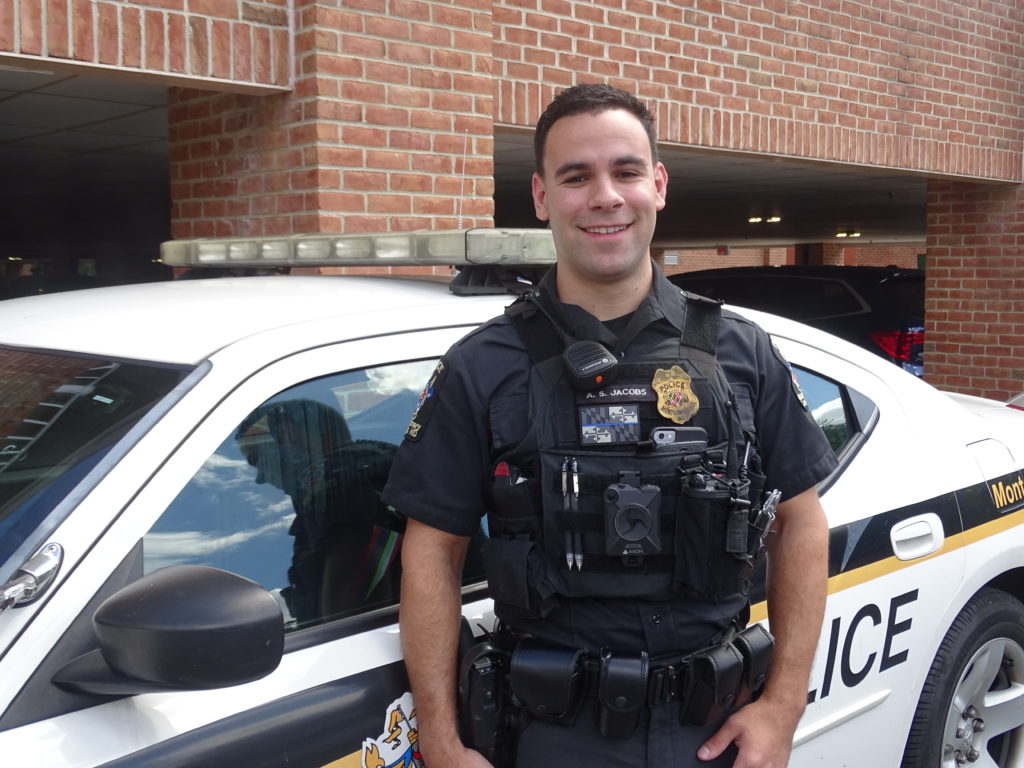 Andrew Jacobs, a 25-year-old Charles E. Smith Jewish Day School and Whitman High School grad, has dedicated himself to public safety — both as a police officer and volunteer firefighter.

We caught up with him before the start of his 3 p.m. shift one day last week to talk policing, the uniqueness of a Jewish cop and his thoughts on doughnuts.

What made you become a police officer?

I started with public safety in December of 2007 with Wheaton Volunteer Rescue Squad and I’ve been a firefighter and EMT there for coming up on 10 years.

Wow, so you must have started when you were a teenager?

When I was 16, yeah. By the time I was 18, I had already gone through the required firefighting classes and was a certified emergency medical technician, so the day of my 18th birthday I transitioned from being a cadet to a fully functional firefighter and EMT.

I’d always wanted to be a firefighter. I think I was 15 when I found out that, at 16, you could become a firefighter and I became obsessed with the idea of doing it. I started [at Wheaton] just a few days after turning 16. My becoming a police officer [with Montgomery County Police in 2014] was a direct path from volunteering at the rescue squad.

How do you think your Jewish background has impacted the work you do?

Police work isn’t traditionally a Jewish profession. And it’s definitely not something that runs in my family. You talk to a lot of guys in law enforcement and their dad was a cop and their grandfather was a cop. But I’m sort of the black sheep of the family and went into a career path that not a lot of people who I grew up with did. It’s something that is sort of unique in the area and the culture I grew up in.

What is your experience on the ground in a time when the relationship between police and minority communities is quite fraught?

Right now, I’m currently assigned to Silver Spring with the district community action team. Our job is to go to areas that are plagued with crime and follow crime trends to try to mitigate them.

So, part of our responsibility as the community action team is to go into these areas that are high crime and try to engage the community in various ways. The biggest way to build a relationship and build trust in those communities is to go to those areas and talk to people and show them that we care about the problems and we are actively working hard to mitigate them.

Are these community action teams in response to some of the criticism?

They are more recent, but as the population grows in Montgomery County, so do the calls for service. There became a need to have proactive officers that their sole responsibility is to enter these high crime areas and follow these crime trends. It wasn’t in response to the current police climate, but all the community action teams certainly play a role in preserving that trust and relationship between the community and police.

Outside of policing and firefighting, what else do you do?

I love riding motorcycles. I have two of them [and] I ride all winter long.

But it’s funny to hear you say outside of policing and firefighting because the real answer is that I could tell you I love going out with friends and whatnot — and I do and I love eating and trying new restaurants — but the need for volunteer fire and rescue is so high because we’re so heavily reliant on volunteers at Wheaton Rescue Squad that outside of police work, that’s really my main thing. I’ve made so many friendships there that, on top of just being there and being ready to go when the call comes, it’s also a release for me. It’s my go-to place.

What are your thoughts on doughnuts?

I don’t eat doughnuts at all. No doughnuts.

Just shattering stereotypes all over the place.

I’m a huge coffee drinker, though. I have an espresso machine next to my bed that goes off with my alarm clock and makes me a little shot of espresso.

Have a suggestion for a You Should Know profile? Candidates must be ages 21-40. Tell us what makes that person so interesting: [email protected].