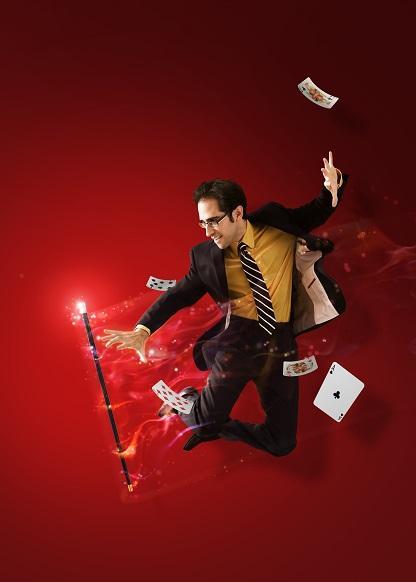 As a professional magician, Benjamin Corey Feinblum brings his see-it-to-believe-it acts to conferences, corporate events, theaters and even bar and bat mitzvahs across the country.

But the 35-year-old got his start in the business of literally wowing people in Maryland. Originally from the Annapolis area, Feinblum studied at the University of Maryland, College Park and the Studio Theatre Acting Conservatory, and lives in Gaithersburg. He spoke to WJW via phone from Los Angeles about his most exciting act, his favorite trick and keeping his magic separate from his personal life.

I’m always doing creative work out here. The person who created that image you’re using works out here and many other people I know. As things developed, people would say “Hey, you should talk to this graphics guy in California.” Eventually all the creative people I work with end up in Hollywood. Sometimes I’m performing, sometimes I’m networking or going to The Magic Castle. Things like that.

How long have you been performing as a magician?

What age did you realize you wanted to be a full-time magician?

I wanted to be an entertainer for as long as I can consciously remember. I thought I was going to be a comedian first. I became a comedy magician when I was around 13 years old.

What can someone expect from one of your shows?

There are illusions, I levitate one member of the audience in my larger shows. I make an energy ball float up in the air and fly around the room. I don’t do card tricks the same way as others do. I would reach up and catch invisible cards out of thin air.

What’s your favorite trick to perform?

I do a floating wand. It’s an act that my reputation is built on, but one I’m very passionate about.

Is that trick the one that garners the most audience reaction?

At this point, they all garner a strong reaction. That one is strong enough that I will kick off the show with it. From the moment they see that, they know the show is going to be different than anything they’ve ever seen.

There are favorites for different reasons. I think David Copperfield is the best illusionist. My favorite magician is Jeff McBride. In terms of comedy magicians, my favorite is The Amazing Johnathan: John Edward Szeles.

Have you ever used one of your magic tricks to pick someone up?

Actually, I really don’t do that. People want to invite me to things because they want to have the magician at their party. I end up around way more people that way. The girl I’m dating right now was actually interested in me completely outside of magic. It can create a feeling of “wow” at the beginning. But if you’re dating someone for many years, that obviously wears off. I always try to let people know who I am. The most important thing to meeting a person of the opposite sex is approaching and saying, “Hi.” I try to keep what I consider to be my special art form as an art.

Is there a big act, trick or illusion you’re working on perfecting?

There are a number I’m working on. My new effects are always completely secret until they’re in promotional material.

You Should Know… Arielle Edberg