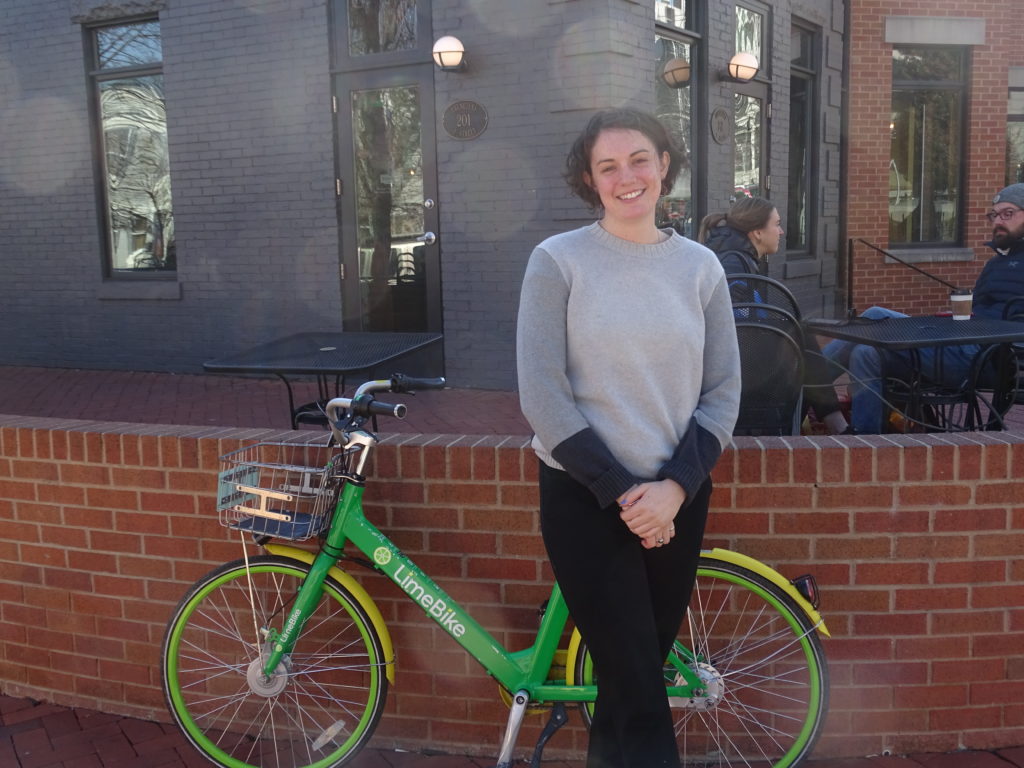 A true Washington native, Claire Jaffe knows the inner workings of the city well. With a background in urban planning and sustainability, the 26 year old is a professional advocate for what’s known as smart growth, the philosophy that urban density and good transit make cities equitable and sustainable.

How did you get started in urban planning?

I lived in Detroit for a short time and studied planning there and it was some of my early introduction to all the different aspects that influence planning from local, state and national politics, race and equity, all those things boiling together in one place.

How different does Washington feel now? Do you still love it here?

I think my D.C. sphere was a lot smaller when I was growing up. It was mostly in upper Northwest, I went to high school in Tenleytown. I’d come downtown to see concerts and things, but growing up we weren’t hanging out on U Street. I have siblings now that are teens and I think they’re kind of city playground is a bit bigger.

But I do love D.C. To me it feels like the perfect-sized city. It’s easy to forget how good we have it here in that way. When I go to other towns, I expect to be able to get around without a car. But I can’t and that’s always so jarring to me. But I think people get kind of jaded living in D.C. and complaining about our transit.

Do you think that people don’t fully appreciate Metro?

I think people just don’t realize how many different options we have, which is not to say that there isn’t room for improvement, obviously. But between rail, bus, biking and walking, it’s really easy to live here without a car, which is sort of the ideal.

We’re the only major transit system in the country that doesn’t have dedicated funding. When you understand that clear-cut comparison I think it can help frame an understanding of how we got into the situation we’re in with our system.

What’s the state of affordable housing in the city and what are some of the challenges on that front?

It’s not great. It’s an issue that so many cities are facing because more and more people want to live in cities, which is great for cities but it does put a lot of stress on the housing market. People inherently don’t love change, so adding a lot of housing is something a lot of people push back on, and it’s a totally normal human response, but we need more housing. But I do feel that we need to be building more housing and that, in the long term, supply will help ease things.

But we also need to prioritize preserving affordable housing for the lower 30 percent of incomes. That’s another big piece of this super complicated puzzle.

What Jewish things do you do?

I’m really lucky that my family is still here, so I’ll sometimes meet my family for Shabbat dinner. That’s something my dad has prioritized since we were kids.

I go to Sixth & I for services when I can. I recently helped a group of friends organize a “Radical Purim” event [with benefits going to community-led anti-violence efforts] and it felt really special that we were celebrating Purim in a community way instead of having some more formal experience. I feel very supported by the Jewish community here. I don’t feel a lot of pressure to necessarily involve it into my everyday life, which works really well for me because I’m really busy and I don’t want it to be a stresser in my life. I want it to be something that fulfills me, and right now that’s what it does.

You Should Know… Arielle Edberg