Need a lesson in Egyptian pop music? Daniel J. Gilman knows a thing or two about it. His newly published book, Cairo Pop: Youth Music in Contemporary Egypt (University of Minnesota Press), analyzes the relationship between pop music and nationalism in the Arab world. Gilman, 36, began writing the book in 2011 during the Arab Spring in Cairo, where he then worked as a postdoctoral fellow at the American Research Center. Now, Gilman, who moved to D.C. in June, is an independent Middle East analyst and consultant.

After growing up in Philadelphia’s Jewish community, Gilman attended Haverford College and later earned a Ph.D. in anthropology at the University of Texas at Austin. He talked to WJW about what he learned about Egypt’s pop music scene during his time there and his plans for future books.

What’s the message of Cairo Pop?
The book is about nationalism and popular music among the youth generation in Cairo. The point is that in Egypt, people use popular music and popular culture to think through what it means to be an Egyptian, and they take that very seriously.

What inspired you to write this book?
It was a long process of graduate study, actually. It just came out of the work I did when I was in graduate school at the University of Texas. Because I’m interested in nationalism and popular music, I ended up focusing on Egypt. I lived in Egypt off and on for about 2 1/2 years. The second time I went there, as it happened, I had the very unusual luck to witness the 2011 uprising. Besides how cool it was in general, I also got to witness the moment where all the usual assumptions that Egyptians had about nationalism and popular music stopped making sense for a little while. I got to see a long period of time of how things are and then a short period of time of how everything was turned upside-down.

What was one of the most interesting facts or revelations you learned while doing research for the book?
I don’t think of most of these things I learned as revelations so much as that’s just how it is there. There are clearly a lot of ways of how we think about popular music and how we think about nationalism in a certain sense. What I was not prepared for … is that Egyptians take popular music very seriously. The Egyptians are very proud of the popular music their country produces, because everybody in the Arab world listens to it. They don’t talk about it all the time, but if you get them going, they’ll really talk about it. They care about it, and they take it seriously in a number of ways that most Americans wouldn’t think of doing.

Who are some of the prominent Egyptian bands and performers featured in the book?
One of them is a band called Wust El-Balad. Another important solo act is Mohamed Mounir.

This is your first book. Do you plan to write any other books in the future?
I certainly hope so; I have plans for several.

What other topics would you like to tackle?
The first thing I have on my plate that I’d like to make a book out of is considerably less pleasant work, because it comes out of what I saw during my time in Egypt, of how an authoritarian state reasserts itself partly with the help of people who we Americans would think want more democracy, not less. There’s a way of co-opting people who should know better. 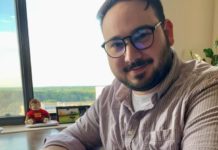 You Should Know… Jacob Bogage