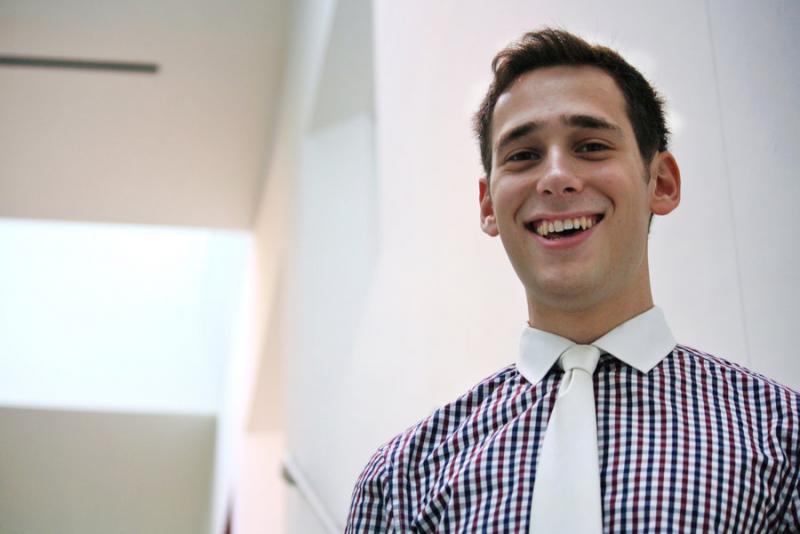 Danny Dubin takes the stage with an empty paper bag. He shakes it up and down and all around as the audience looks on in curiosity. What will come next? The 22-year-old magician reaches into the bag and pulls out…  a fish bowl containing live fish. Wow!

Dubin, an American University public relations student from suburban Chicago, has performed this trick for  audiences all over the country. He has performed at the Embassy of Australia, the World Bank and the Chicago History Museum, among other high-profile venues. He received the Lance Burton Award of Excellence at both the 2010 and 2011 World Magic Seminar in Las Vegas.

Raised in the Reform movement, Dubin was president of the NFTY-Chicago area region and attended URJ Olin-Sang-Ruby Union Institute for nine summers, both as a camper and staff member. He studied at Hebrew University of Jerusalem last spring and is student programs coordinator at AU Hillel.

We recently caught up with Dubin to talk about catching the magic bug at an early age, his favorite Jewish text and Houdini’s masterful public relations.

How did you become interested in the art of magic?

When I was about 8 years old, I was at a day camp and we had to do a different activity or specialty. I did clowning, and the clown, every day for an hour or so, would show us face painting or balloon making, and every once in a while magic. She showed us a magic trick and I got hooked, and so she told me to go to the local magic shop. I went there with my mom, bought my first magic trick and caught what we call the “magic bug” and have been doing it ever since.

Is there a magician you really admire, that you look up to?

David Copperfield. He’s definitely the best in the business right now, definitely the best of the century. He took magic and made it an incredible art form and theater form that it is today. Obviously Houdini is a great influence as well. In terms of a public relations standpoint, he did an incredible job of using the press to his advantage. He used the press to make it known that he was this incredible escape artist and he got worldwide fame because of that.

Is there a difference between performing in front of Chicago and D.C. audiences?

Performing in any big city for the most part is the same. D.C. is a very liberal city. Chicago for the most part is a liberal place as well, so in terms of the tones and the mannerisms, they can be very similar. But in D.C. there are a lot of jokes that I wouldn’t use in another city. For example, in my show right now I have a Trump joke, and I don’t know if I would necessarily use that in Chicago. In D.C. I know that would kill and in Chicago maybe a few would laugh — but not everyone in the room. So when you’re looking at the tone of the scripting, you definitely have to consider where you are.

What is your favorite Jewish text and why?

My favorite piece of Jewish text comes from Isaiah. It’s when God says or l’goyim, that Jews will be a light unto the nations. And that’s really stuck with me for a while because I think it really speaks volumes to the fact that Jews have to be confident in themselves and what they know to be right and wrong, but also to show the world what it is to be right and wrong. That really speaks volumes to my magic. I try to not just give a magic show and just do a bunch of tricks. I try to leave my audiences with a message — to look out for each other and to understand that there can be real magic in the world when we’re compassionate to each other.