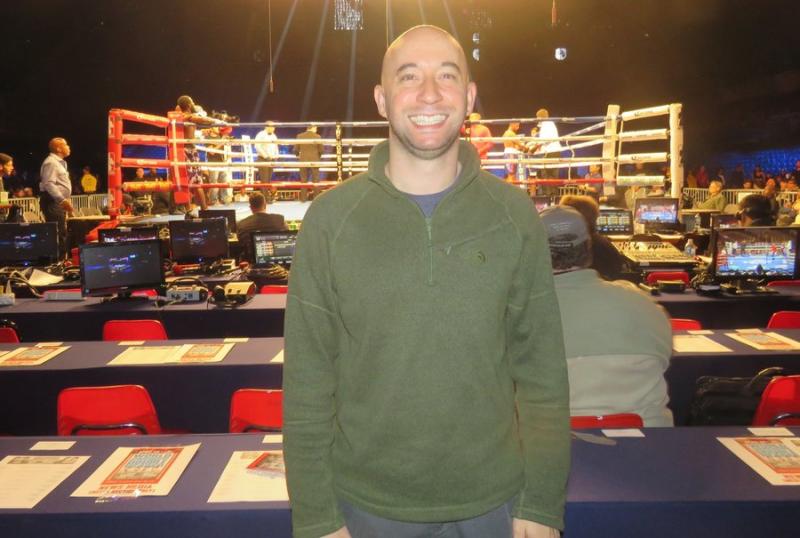 David Greisman is following a boxing writer’s dream. While the Columbia resident continues his day job in media relations and communications, the 34-year-old is steadfastly honing his craft as a boxing writer.

When you were growing up, did you want to be a sportswriter?

I liked all of the local teams, and I watched the fights on occasion with my father, mostly on HBO. I loved sports, and I would take The Washington Post’s sports section to school with me every day, and I just loved good writing.

Which sportswriters were your favorites?

Sports Illustrated’s Gary Smith and boxing writer Thomas Hauser were big influences.  These two are always good, and I’m always trying to be as good as them. Hauser looks at his writing as chapters in history.

What to you is great writing?

Sometimes it’s about the turning of a phrase. Sometimes it’s the insight, or the get. It could just be getting a good interview and bringing it forward. When I taught my students, I told them the same thing.

Where did you teach?

McDaniel College [in Westminster]. I was an adjunct professor for three semesters.  I told them: “Your job as a writer is either tell the story that nobody knows or to tell the story everybody knows but tell it better than anyone else has done it before.”

As a freshman in college, you noticed that one boxing site happened to be accepting submissions?

Yes, this was boxingscene.com. I was working for the school newspaper, and I watched lots of boxing matches online.  I saw on the bottom of the page that they were looking for writers.  At the time, they were based in New York, and now the editor is in Las Vegas, of course. His name is Rick Reeno.

Perfect for him to be in Vegas, then.

Yes. I began sending him my material. The fact that I’ve been along for the ride [all of these years later] means that I’ve gotten to grow with him. I’m thrilled that for all of those who were reading us back then have remained with us.

Frankly, it’s a grind. The thing that makes it work is the fact that I’ll turn around a lot of news briefs for the boxing sites. I will do lots of interviews [with fighters], go to press conferences, and can work quickly.

Which news sites are usually now the ones who commission you for stories?

When I cover the fights, I’m traveling with boxingscene.com. I have a regular gig for Ring magazine… and Everlast — a sports equipment company. I write boxing results pieces for them. USA Today has commissioned me a few times.

Like a boxer, have you ever felt that you’ve had to constantly prove yourself and continue to overcome great obstacles?

The difference between professional boxers and myself are that my struggles have been self-imposed, and theirs are something that society has dealt upon them. I had stopped being a good student at one point, and that made things more difficult. I limped to the finish line in high school. I was a retail manager who had no idea whether I’d have a future.  I’m proud of where I’ve gotten.

As for your connection to Judaism?

I didn’t really find my Judaism until later in life. I wasn’t bar mitzvahed until I was 26 atop Masada — through Birthright.

What other Jewish affiliations do you have?

As I’ve got older, I felt like I had to be more aware of the traditions. I wanted to get more connected. When I lived up in New England, I found a great synagogue in New Hampshire and I got more connected with the faith. The trip to Israel kindled that, and when I came back, I did some weekly Torah studies with a friend.

Are there any Jewish fighters you’ve covered?

Yuri Foreman. I saw him fight in June 2010 at Yankee Stadium. He came to the sounds of the blowing of the shofar. It was the only time I heard “Hatikvah” being played at a fight.