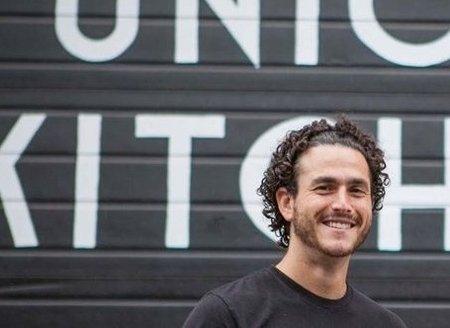 The secret is out that the nation’s capital has become a foodie town. But while chefs from around the world are contributing to a restaurant revival in Washington, there is a thriving local food scene that Jonas Singer, 33, is leading.

Born in Bethesda, raised in Chevy Chase and living in D.C., in 2013 he co-founded the city’s first culinary incubator, Union Kitchen, with Cullen Gilchrist.

So many food entrepreneurs were taking advantage of the 7,300 square-foot space in the rapidly developing NoMa (North of Massachusetts Avenue) neighborhood of Northeast Washington that Gilchrist and Singer this past September expanded to a 15,000-square-foot warehouse in the Ivy City neighborhood in Northeast D.C. Also last year, they opened Union Kitchen Grocery, a 1,000-square-foot market in Capitol Hill.

Singer recently took time out to discuss the state of D.C.’s food scene, the elements of a sustainable food system and his favorite food.

The mission of Union Kitchen is to build a food system that’s profitable, just and sustainable. We operate a family of businesses that together vertically integrate parts of the food system, especially the local and regional level, with the goal being to provide small and local businesses greater opportunity to get to scale and viability. The different integrated parts of that are a food incubator — a large kitchen space wherein we also offer value added services. We run distribution and catering companies and a corner grocery store. The goal is to integrate all of those parts that help businesses make it, move it and sell it through the kitchen. They’re able to essentially have a one-stop shop to get their business growing and launched, and hopefully getting to high levels of revenues and profitability.

How have you been able to grow your membership over the years?

We have a very high rate of success, especially relative to the industry in general in terms of the quality and effectiveness of the businesses we work with. Our track record speaks for itself and has really pushed us forward. Additionally, we’ve been fortunate enough to receive a good amount of media coverage, and we focus heavily on getting out into the community, being part of the neighborhoods that we’re in.

How is the new Ivy City facility coming along?

It’s good. We’ve been open there for about six months now. We’ve got about 45 businesses that operate out of there. We operate our distribution company out of there, our catering company out of there. So the launch of Ivy City, which is really our flagship, has been an interesting experience. Now that it’s up and operating we’re very pleased with the impact it’s having on the businesses we work with, as well as really putting us in a class of our own in terms of the work that we do.

What response have you gotten for your grocery store?

A very positive and strong one. People are very happy to have us in their neighborhood. They are excited by the prospect of having great local products, good local food, tasty sandwiches and breakfast. The grocery has been a hit all around, and we’re in the process in fact of opening more of them. One of the big things to look out for from us in 2016 is launching our second grocery store and hopefully there will be more to come down the road as well.

Where is the local food movement at right now?

The local food movement is trying to burst through and figure out how to have staying power. Local food has a lot of appeal and sexiness to the general consumer. I also think though that the average consumer may not fully understand the economics of local food. One of our big missions with Union Kitchen is to really help build the narrative of what it takes to run a sustainable regional or local food business. I say regional because I really think that’s where this will move to. Regionality is what allows for enough scale to make local food a successful business model.

What do you consider a sustainable food system?

So sustainability is first and foremost financial.  If you’re selling a chocolate chip cookie for a dollar and out of that dollar you’re only keeping five cents profit, how many cookies do you have to make every year to cover your salary? The answer to that question starts to get to financial sustainability. And then, of course, there is environmental sustainability, the way in which we’re understanding the different opportunities for getting food from the ground to our bellies. Thirdly, it’s the people — the workers, work conditions and having businesses that are making enough money to support their employees with health care and benefits and a living wage.

Where do you see the D.C. food scene going?

The D.C. food scene has matured greatly. There are a lot of newer operations that are standing on the shoulders of some really established pioneers, and we are in that second and third wave of food people that have come into the city. One of the exciting things that will be happening in the D.C. food scene over the next few years is less on the restaurant-bar side but more on some of the hole in the walls. We’ll continue to see, I hope, a growth in some of the ethnic food options and some of the more accessible kind of eating establishments as well as a greater development in terms of food products, things that you’re buying off the shelves of your grocery store, things that restaurants and other businesses are buying from others to use as their inputs. That sort of development is really exciting because D.C.’s never really been an exporter of products, and there is a real move to start to do some of that. The D.C. food scene is very strong right now, and I’m excited to see it continue to grow.

What is your favorite food?