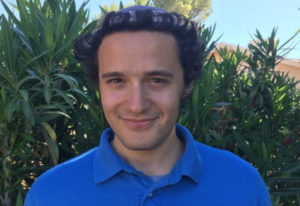 Judah Lesser, 22, graduated from University of Maryland last December with a degree in computer engineering. He still lives in College Park and is a part of the university’s Jewish community, in addition to working at a defesnse contractor in downtown Silver Spring.

You grew up in El Paso. What was that like?

There’s a Chabad, a Conservative and a Reform shul. I’m Orthodox, so I mostly went to the Chabad. It’s very little. You know anyone who shows up with any regularity. I was the only one there my age. I didn’t hang out with other people because, well, there wasn’t anyone in the Orthodox community, and I was shy and quiet. We lacked resources compared to a place like College Park. It’s not as vibrant.

My parents moved there because my dad found a job at the university in El Paso. They still live there, but they’ll probably leave when my dad retires and then they’ll move to wherever I do, because I’m an only child.

How has your identity changed since you moved to Maryland?

I knew what I was getting into. I knew the Jewish community was going to be big, because I’d toured here. But it was still a big change. It was amazing, really, and there’s not another way to describe it. I fit right in, in the U-Md. community, really nice, a game changer to have all these people my age of the same hashkafah [outlook, perspective].

I got really involved in the Eruv Committee, which makes sure that the eruv around the campus is intact. I was tech chair for Kedma, the school’s Orthodox union, for a year. And I was also involved in the National Hillel Torah Bowl. It’s teams of students from different colleges who come here for a quiz bowl, answering Torah trivia questions and competing in a bracket. It’s not competitive, it’s mostly just fun, and we get to meet people from different colleges. Me and a friend started it in Fall 2021 and we’re having our second annual tournament this year.

Even though I graduated, I’m very much involved in the Jewish community at U-Md. I found a home at Maryland.

What are you doing now?

Since January, I’ve been working at Peraton Labs, a defense contractor, in Silver Spring. I might make aliyah. I have a lot of family in Israel, all my mom’s family is there and there’s a strong ideological appeal. But I don’t know, nothing’s final.

What do you wish people understood about growing in a small-town Jewish community?

People assume there’s only a few major cities where Orthodox Jews live and we don’t exist elsewhere. But really, there’s a lot of small communities struggling, without a lot of resources. It’s a totally different frame of reference. Like, what’s considered good for El Paso wouldn’t even be comparable to here. We’re very far away from everything — it takes me two plane flights to get from here to El Paso. There’s a whole world out there where being Jewish is very different.